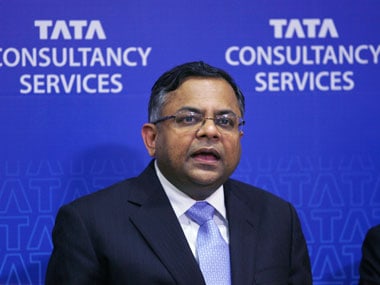 Natarajan Chandrasekaran has been appointed as the new group chairman of Tata Sons. His appointment, though not a surprise, brings all speculations regarding the chairmanship to a halt. Given Chandrasekaran’s long and successful track record at TCS, it was believed that he would be the new chairman. He is the perfect choice and most suitable person within Tatas to lead the group. There is a valid reason for this. Most people close to him and those who know him believe that Chandrasekaran has amicable relationship with all group heads and, directors. He is known for his farsightedness and visionary planning, which Tata Sons is in dire need of.

Chandra will have the biggest responsibility to drive Tata Group forward and take it through the crises posed by the deposed chairman Cyrus Mistry.

Earlier Chandra was CEO and managing director of Tata Consultancy Services. He took over as the CEO on October 6, 2009. Prior to this he was COO and Executive Director at TCS.

Since Chandra is now the chairman of Tata Group, TCS would be led by Rajesh Gopinathan as the CEO. Gopinathan till now was the CFO of TCS. He will have the responsibility to grow TCS business in his new role.

“The current discourse on the issue in the US is driven by emotions” – Rajesh Gopinathan , CEO, TCS

What is your appraisal of the current IT market dynamics? The global business is transitioning…

Unmaking of Cyrus; Fingers Crossed for Tata Sons’ Next Chairman