Jio GigaFiber or Jio DTH service as it is widely known was finally unveiled on a commercial basis earlier this month. Much to the users’ delight, Reliance chairman and managing director has promised Jio DTH or Jio Fiber users various exciting features at affordable prices. However, a certain offer announced at the 42nd Annual General Meeting of Reliance Industries Limited seems to have stirred up a debate.

Users of Jio DTH or Jio Set Top Box will, from September 2020 onwards, be able to watch movies on a first day first show basis from the comfort of their homes. To make the viewer experience better, Jio 4K LED TV will also be provided for free to users. While several users are hailing this move by Reliance Jio, which undoubtedly will disrupt the market, PVR, INOX and other multiplex owners voiced their concern about their businesses bearing the brunt of this move.

While PVR spoke about how theatrical release window has been a valuable model for exhibitors and producers, INOX issued a statement saying “The producer of the film is the owner of the creative content and is therefore entitled to choose the platform for distribution and consumption of his content. However, in view of this mutually agreed exclusive theatrical window, he would have to choose between theatrical exhibition or release on any other platform, since release on both simultaneously would breach the mutually agreed exclusive theatrical window.” 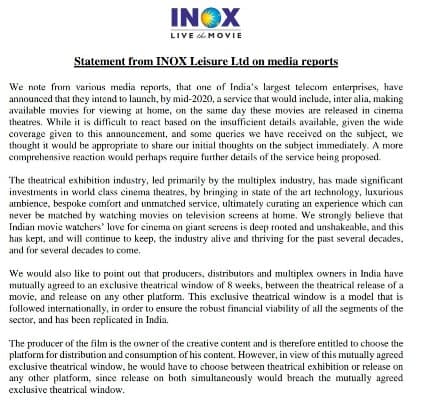 Furthermore, the official account of AndhraBoxOffice has tweeted saying “PVR Releases Statement on #JioFDFS Plans. Expect the Multiplex Bodies to fiercely oppose and Refuse to exhibit any movies which are available on Digital Medium from Day 1.”

Nevertheless, after these statements were issued, several users have commented that the first day first show feature being offered by Jio DTH will be preferred as multiplexes tend to “overprice” the food items. “That’s great revolution in Indian cinema. We always have to spend on heavy ticket rates and all food stuff. Thanks to Reliance and Ambani family for getting all the facilities in one connection,” wrote a viewer Anil Koshti to DataQuest.

“Any service providers should give best services at affordable cost. But certain category of business people invest money and loot ROI from all corners. As rightly said, Parking, Eatables, etc. are more than Ticket cost. Ultimate sufferers are public only. We always welcome new technology with affordable cost like Jio,” says another viewer.

Several movie goers seem to have the same opinion on Twitter as well. “To give ‘unmatched movie experience’, you must first reduce ridiculous price you charge for Popcorn, and other items,” tweets Arjun.

“Even if a few days exclusivity is allowed, most people will prefer to wait for Jio home release of movie and watch on their home LED TV ordering from Swiggy. Goodbye pepsi popcorn combos costing INR 499,” says another user on Twitter. 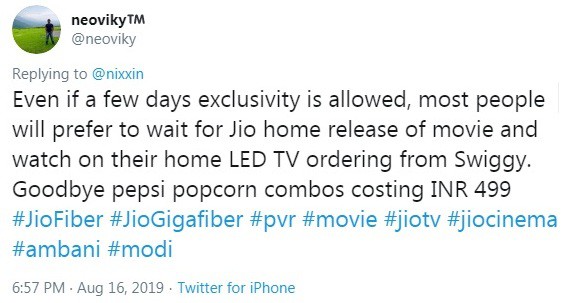 Users also believe that this service, which will be made available by Jio DTH or Jio Set Top Box, will give rise to various benefits. “1. Cost of multiplexes movie tickets will reduce. 2. Food cost at multiplexes will reduce. 3. Ticket availability and more discount offers for watching movies at multiplex. 4. Reduction in Piracy – as movies will be easily available on Jio Set top box. Why would one watch pirated version when somebody next door or you yourself have access to legitimate Jio set top box. 5. Affordable combination of broadband + landline + Cable + Movies,” says Sumit on DataQuest.

That said, the debate on this issue is far from over and is expected to escalate when the first day first show feature comes close to getting unveiled on Jio DTH. Having said that, what do you have to say about this issue? Is the move announced by Reliance Jio unfair to multiplexes? Or do you look forward to the service being unveiled by Jio Fiber or Jio DTH? Do let us know your views in the comment section.