NASA has finally confirmed finding the Vikram lander of the ISRO Chandrayaan 2 on the surface of the moon. NASA has released images of the debris of the Vikram lander, which was clicked by the Lunar Reconnaissance Orbiter Camera of its lunar mission.

The image regarding the same was tweeted by NASA saying “The Chandrayaan 2 Vikram lander has been found by our NASA Moon mission, the Lunar Reconnaissance Orbiter. See the first mosaic of the impact site.” Furthermore, NASA also released a statement on its website providing further details of the image. “This image shows the Vikram Lander impact point and associated debris field. Green dots indicate spacecraft debris (confirmed or likely). Blue dots locate disturbed soil, likely where small bits of the spacecraft churned up the regolith. “S” indicates debris identified by Shanmuga Subramanian,” says NASA in a statement. 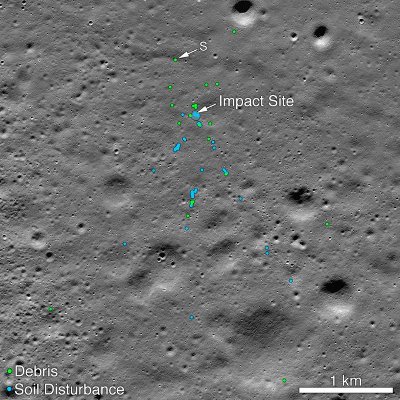 Shanmuga Subramanian is a Chennai based engineer who is now being credited by NASA of identifying the Vikram lander on the images released by its LROC team. “After receiving this tip, the LROC team confirmed the identification by comparing before and after images. When the images for the first mosaic were acquired the impact point was poorly illuminated and thus not easily identifiable. Two subsequent image sequences were acquired on Oct. 14 and 15, and Nov. 11,” adds NASA in its statement.

ISRO Chandrayaan 2 mission was going as planned until just a few minutes before the Indian Space Research Organisation (ISRO) lost contact with the lander shortly before the scheduled touchdown on 7 September 2019. However, all the details regarding the shortcomings of Chandrayaan 2 have been collected and submitted to the Space Commission, and Chandrayaan 3 is also likely to take place some time in the future.

Posted by: DQINDIA Online
View more posts
ISRO Chandrayaan 2: NASA Finds Vikram Lander Debris on the Moon 0 out of 5 based on 0 ratings. 0 user reviews.
Mastercard transactions will now be validated with sonic melody on Android-based PoS machines
Benefits and importance of open source technology for enterprises

One response to “ISRO Chandrayaan 2: NASA Finds Vikram Lander Debris on the Moon”