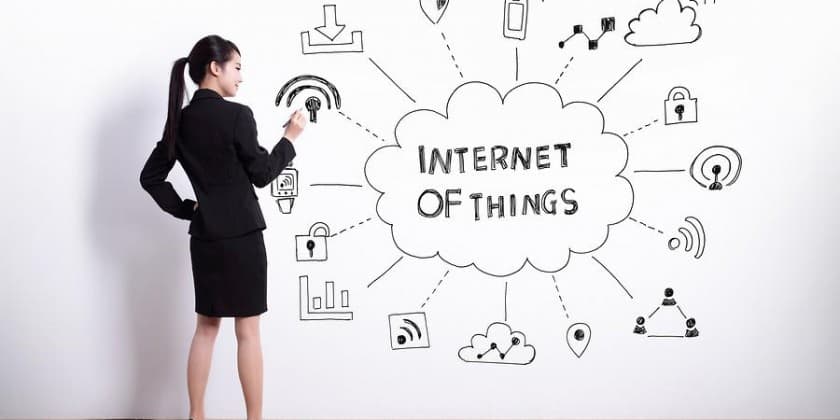 “How Did It Go Off Early?” you think, waking up to your alarm at 6:30 am instead of the 7:00 am that you had set it to. What has happened is your smartphone has collected data from the weather app stating that it is raining, which means you have to drive slower than your normal speed (data collected from your car’s speedometer and shared with your phone) and for that you have to wake up and leave for work early. So your intelligent smartphone has decided that you need to wake up half an hour early to be on time at work. This is IoT for you!

Internet of Things (IoT) also referred to as Internet of Everything (IoE) is one of the four pillars of digital transformation that will eventually define and transform the way of life as we know it. Internet of Things is already being applied and will in future become indispensable to every industry that exists. IoT will enable and automate the process of data sharing for it is the network of physical devices, vehicles, home appliances, and other items embedded with electronics, software, sensors, actuators, and connectivity which enables these things to connect, collect and exchange data.

IoT enabled devices have the ability to communicate and interact over the Internet, while being remotely monitored and controlled. IoT gets its name for it is a convergence of multiple technologies, such as real-time analytics, machine learning, commodity sensors, and embedded systems. All the data that is collected is stored on cloud and then secured. Machine learning and data analytics then comes into play, which can then make even a ‘dumb’ device ‘intelligent’.

Apart from home automation or ‘smart homes’ as they are popularly known, Internet of Things has various use cases in the following areas:

Healthcare: Internet of Things can be extremely beneficial in data collection, analysis for research, and monitoring patients on a real-time basis. IoT could help in monitoring a patient’s health remotely and also alert doctors in case of an emergency via emergency notification systems. These health monitoring devices can range from blood pressure and heart rate monitors to advanced devices capable of monitoring specialized implants, such as pacemakers, Fitbit electronic wristbands, or advanced hearing aids. A 2015 Goldman Sachs report indicated that healthcare IoT devices “can save the United States more than $300 billion in annual healthcare expenditures by increasing revenue and decreasing cost.”

Logistics: IoT has done a world of good in the supply chain management industry through inter and intra vehicular communication, smart traffic control, smart parking, electronic toll collection systems, logistic and fleet management, vehicle control, and safety and road assistance. Mr Surajit Sengupta, Director of Iconex USA, gave DataQuest an example of transportation of perishable goods using an IoT enabled transportation system, wherein the technology would be able to monitor the condition of the perishable goods on a real-time basis, traffic conditions and would be able to suggest the driver of the vehicle if he needs to quickly store the perishable goods in the nearest warehouse.

Agriculture: Vast data has been collected over hundreds of years on weather and other aspects such as temperature, rainfall, humidity, wind speed, pest infestation and soil content. This IoT acquired data can be used to automate farming techniques, take informed decisions to improve quality and quantity, minimize risk and waste, and reduce effort required to manage crops. Farmers can now monitor soil temperature and moisture from a distance, and even apply IoT-acquired data to make fertilization programs more precise.

Manufacture: By using Internet of Things in manufacturing one can use sensors to detect which areas in a showroom are the most popular, and where customers linger longest; drill down into the available sales data to identify which components are selling fastest so that they can stock up on the same faster; and automatically align sales data with supply, so that popular items don’t go out of stock, says a blogpost on IBM.

IoT can also be used for traffic management, environmental monitoring and even disaster management to predict earthquakes, forest fires and Tsunamis.

Although IoT has numerous applications, it doesn’t come without challenges. Data privacy and security are major concerns when it comes to IoT. To clean, process and interpret the vast amount of data and to store this data in a secured manner is a major task for IoT applications especially in a country like India. Security is the biggest concern in adopting IoT. Cyberattacks are likely to become an increasingly physical (rather than simply virtual) threat with the advent Internet of things. Legacy infrastructure is another issue that arises when it comes to IoT, as patches to bugs found in the core operating system often do not reach users of older and lower-price devices. There is also a lack of a clear business model when it comes to IoT, which is hindering the implementation of IoT on a large scale.

Regardless, despite these challenges, which will be addressed eventually, IoT is set to grow. Furthermore companies need to start delivering all components that comprise the digital transformation journey namely Internet of things, artificial intelligence, cloud and cyber security rather than providing just one aspect of the same.

(With inputs from Wikipedia)

Posted by: Supriya Rai
View more posts
Tags:big data and IoT, internet of everything, Internet of Things (IoT)
Why IoT is Such a Big Deal and the Inevitable Trend in Coming Years 0 out of 5 based on 0 ratings. 0 user reviews.
Telerad Tech Launches an Innovative AI Product to Detect Early Stage Breast Cancer
Alibaba, Amazon will have Captured 40% Market Share by 2023: Gartner

In the upcoming years,  IoT (Internet of Things) is certainly going to become a part…

Avaya introduces a framework for the Everywhere Data Center