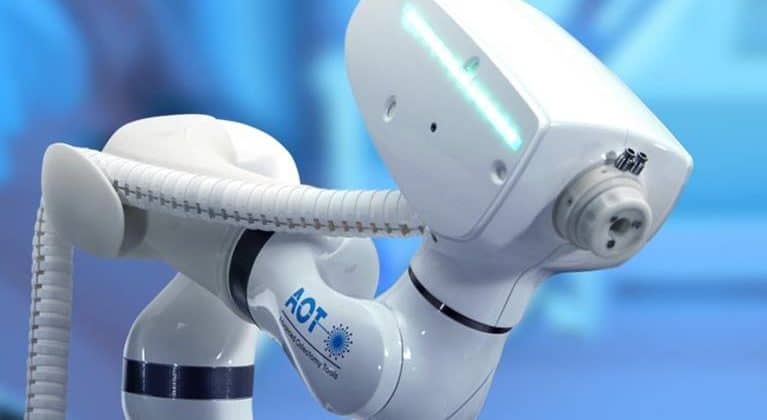 Swiss medtech company Advanced Osteotomy Tools AG (AOT) has announced its first clinical use (first-in-man) of CARLO. The medical device with the LBR Med from KUKA was successfully used in the Oral and Maxillofacial Surgery department at the University Hospital Basel, Switzerland.

Laser and robot for bone surgery
For the first time, human bone was cut using a robot-guided laser osteotome instead of a traditional instrument, such as a saw, drill or cutter. CARLO – an acronym for Cold Ablation, Robot-guided Laser Osteotome – facilitates automatic and precise osteotomies according to pre-planned cutting lines using an entirely digital workflow and cold laser ablation.

The laser head is mounted on the LBR Med, which was specially developed for medical applications. This technology allows surgeons to perform osteotomies with utmost precision and in freely defined, curved and patient-specific configurations that would not be possible with conventional instruments.

The current clinical first-in-human study, which serves as the basis for the market launch, is intended to demonstrate the performance and safety of CARLO in a clinical environment.

As CARLO is the first system of its kind, the safety requirements are very high. These have been successfully tested in several pre-clinical studies. The system benefits from the fact that the LBR Med is the world’s first robotic component for integration into a medical device that is certified according to the internationally recognized CB method.

Cyrill Bätscher, CEO of AOT AG, comments: “We are very pleased to announce that the first-in-man use of CARLO was completed. This was the first non-contact robotic surgery made possible by our laser technology.”

Prof. Philipp Jürgens, CMF surgeon at the University Hospital Basel, and co-founder of AOT, adds: “Despite the fact that the laser itself has no haptics, CARLO can be stopped at the speed of light and easily removed if anything unexpected happens. That is not possible with today’s robot-assisted devices.”

The company expects high clinical interest for the robot-guided laser system for bone surgery. “We expect that the clinical interest in this innovative platform will be quite significant after we get approval for commercial release in the coming months,” Bätscher adds. Laser osteotomy is an emerging new field in bone surgery with great potential – also for the LBR Med from KUKA.

Augsburg, Germany based KUKA AG is one of the leading global suppliers of intelligent automation…