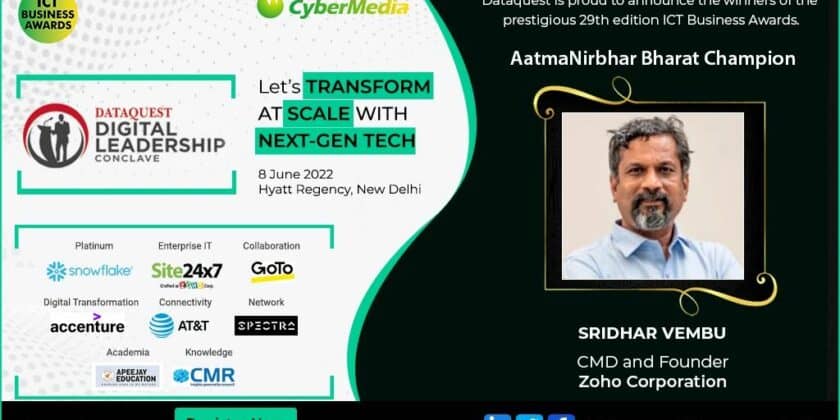 Sridhar Vembu, Founder and CEO, Zoho Corp. was presented with the AtmaNirbhar Bharat Champion Award at the 29th ICT Business Awards show. The award show was held during the Dataquest Leadership Conclave held at New Delhi’s Hyatt Regency on June 8. The theme of the conclave was Let’s Transform at Scale with NeXtGen Tech.

But almost everyone recognises this once-living-in-the-Bay-area denizen well for flipping the script and taking software and product development functions from urban centers into rural villages in India. The company he founded not only went on to become a big name in the global CRM circuit but also derived its power from the hinterland of India—with offices in rural Mathalamparai, Tenkasi district, Tamil Nadu, and sub-urban Andhra Pradesh.

Quite deservingly, he was anointed with India’s fourth highest civilian award, the Padma Shri, in 2021.

With a degree in Electrical Engineering from IIT Madras, and MS and PhD from Princeton University, he has added a lot of velocity to the story of India’s arrival on the global IT map.

He has given immense support at the National Security Advisory Board. At the same time, he has fuelled the social sector dimension very strikingly with a rural school start-up and ventures like Zoho Schools that have expanded and deepened the power of education to the less-privileged and easily-forgotten kids.

As one of his recent Tweets said…

Excessive brain drain degrades the capability of a poor nation to ever catch up in terms of technological know-how because the talented people needed for the catch up are gone.

Truly, Sridhar Vembu has been a champion and on-street soldier for strengthening the future of India’s talent–beyond cities.

The jury and organisers of the Dataquest ICT Business Awards 2022 confer the AatmaNirbhar Bharat Champion title to him for these disruptive strides and wish him many more milestones ahead.”

Tech predictions to watch out for in 2023

Technology continues to be a key enabler of an evolving world, developing at a rapid…