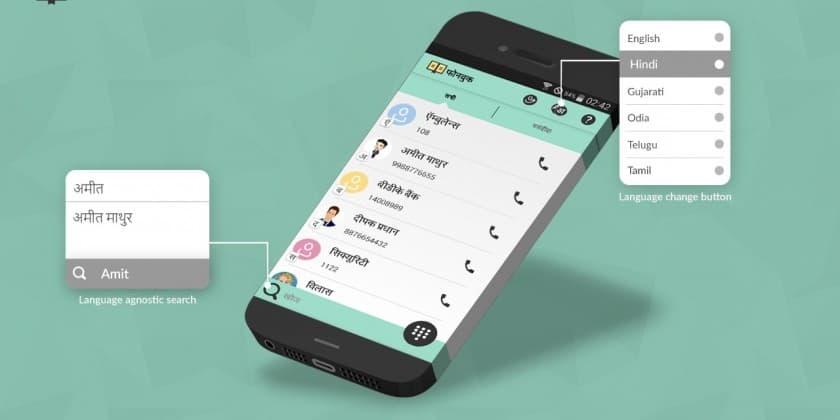 Understanding the need for providing its devices in local languages for its Indian customers, Zen Mobile has partnered with Reverie Language Technologies for ‘language localisation’ solutions. 20+ Zen smartphones including it’s recently launched Admire Dragon and Cinemax Click smartphones will now come pre-installed with Reverie’s Indic Phonebook, Indic Keyboard Swalekh Flip and its Language Lockscreen, while 40+ feature phones models will contain Reverie’s proprietary fonts and keyboard solutions. Zen has now become the first company in India to comply with the BIS mandate that asks all phones to provide display support in 22 Indian languages apart from the ability to type in English, Hindi and the specific regional language of each state by July 2017.

Other integral features of Indic Keyboard Swalekh flip include:

Apart from this, the keypad comes with regular features like word prediction, themes, emoticons, swipe in English and more.

Today the contacts on a phone are saved by default in English but this changes with Reverie’s Indic Phonebook on the Zen Mobile smartphones which supports 11 Indian languages- Hindi, Bengali, Telugu, Marathi, Tamil, Gujarati, Kannada, Malayalam, Odia, Punjabi, Assamese and English, allowing the end consumer to SAVE, SEARCH & READ the phone contacts in their language of choice and makes it India’s only true language agnostic phonebook.

The Language Lockscreen on Zen Handsets replaces the pattern based locking-unlocking or number (PIN) unlock generally seen on handsets and puts the power of choosing to unlock the phone in the language of choice squarely in the hands of the consumer. Depending on the language the user chooses to unlock, the handset enables the phone settings & display icons to be viewed in their language of choice, therefore, making the phone multilingual.

Commenting on Reverie’s association with Zen Mobile, Arvind Pani, CEO& Founder Reverie Language Technologies said “English as a Language is linear, Indian Languages are highly complex. Reverie’s mobility solutions have been built with extensive R&D to make it intuitive and easy to use for end users. We are glad Zen recognises our capability to propel a localised and digitally connected populace.”

Rise of the Electric Vehicle Market in India