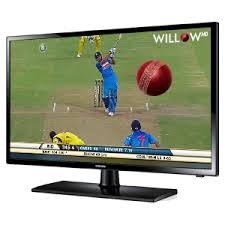 Times Internet, India¹s leading digital network and part of The Times of India Group, announced that it has reached a definitive agreement to acquire Willow TV International, the leading cricket broadcaster in the US.
Willow is one of the fastest growing sports networks in the U.S, featuring the world¹s most popular cricket matches and events. Named after the English willow tree from which cricket bats are made, Willow is the only channel that is dedicated to cricket in the US, with an aligned direct-to-consumer digital service at www.willow.tv. The channel and its associated TV Everywhere service is widely distributed by the largest satellite, cable, IPTV and OTT platforms in a variety of subscription packages, including sports packs and South Asian targeted packages. The channel is available on 7 of the top 10 pay television platforms in the US, with more new launches in the pipeline.

Cricket is one of the fastest growing sports in the US, and the second most popularsport in the world behind soccer. Cricket¹s popularity worldwide has skyrocketed with the addition of the newer, faster Twenty20 format, where matches complete in a few hours. In addition, a growing, wealthy South Asian and expatriate audience has contributed to cricket interest in the US.

Times Internet is India¹s largest diversified digital group, owning and operating media and technology assets across news, music, sports, and more, reaching over 140 million users each month. For Times Internet, Willow is complementary with its recent acquisition of Cricbuzz, the world¹s largest online cricket destination. Last year, during the ICC World Cup 2015, Cricbuzz saw over 1 billion visits in a span of 40 days, 96% on mobile. Between Willow, Cricbuzz, and Times of India¹s digital assets, the group estimates reaching about 15 million Americans with an interest in cricket. Willow is the first international acquisition by Times Internet, and the first US acquisition for The Times of India Group, India¹s largest media company.

The timing of the deal is also significant. Starting on March 8th, Willow will exclusively provide a live US television broadcast and live stream of the ICC World Twenty20, the world¹s premier Twenty20 cricket tournament. This is the first time an ICC tournament has been available on a US television broadcast channel, expanding its reach beyond the traditional and expensivepay-per-view distribution method. In parallel, Cricbuzz will exclusively deliver pre-match, in-match, and post-match highlights and coverage of the entire tournament to US digital audiences. Willow and Cricbuzz will be the exclusive destinations for this premium content from the ICC World Twenty20tournament, available to millions of Americans across TV and digital.

Satyan Gajwani, Director, Times Internet, said: ³We¹re extremely pleased to welcome Willow to The Times Group. Cricket is one of the most popular sports in theworld, and has the potential to become a major sport in the US. We¹re excited to expand and strengthen our offerings for South Asians living in the US, and to grow interest in cricket across the US, both with loyal fans and new consumers.

Vijay Srinivasan, founder and CEO of Willow TV, said: ³As a bootstrapped company, we launched the Willow cricket channel just over 5 years ago, and we¹re extremely proud of where it has reached. With the backing of The Times of India Group and its assets, I¹m confident that we can jointly build one of the premier sports businesses in the US.²