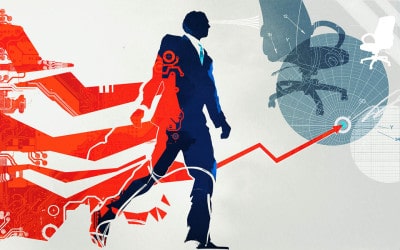 What does it take to be a successful digital business leader?
Step 1: “Fire” yourself from the CIO role.

The real challenge (and opportunity) of digital business is that few people within most companies know enough about technology to lead a digital transformation. Because so few businesses have been able to successfully scale digital business, experienced leaders are in extremely short supply.
CIOs have an opportunity to step forward and utilize their technology savvy, in combination with business and delivery knowledge, to lead the transition. Digital business has created a leadership void in many enterprises that business-oriented and forward-thinking CIOs are uniquely positioned to fill.

It might seem obvious, but some CIOs hesitate to step forward not because they lack the technical skills, but because they’re missing soft skills.
Fortunately, these skills can be learned, and CIOs looking to step up should focus on three: Courage, communication and credibility. First, tackle the courage aspect of becoming a great digital leader.

Have the courage to fire yourself

Obviously the advice to “fire yourself as CIO” doesn’t literally mean remove yourself from the company. It means it’s time to evolve the role and responsibilities to better match the digital business. The key is to move from an operational CIO who is running the day-to-day and responding to business objectives set by the CEO to a role that is leading the digital transition. Start by delegating the everyday running of the IT department to a COO of the IT organization and embrace a leadership role in the digital business.

Have the courage to deal with challenges

Change is scary, and people will be threatened by a large transformation. Remember that the current business model — although not sustainable in the digital world — represents how people have built their careers, including the CEO. This means that the idea of change will create fierce opposition. The CIO must now be responsible for leading the change in a way that deals with opposition, but also evolves the business.

Have the courage to be uncomfortable

Being uncomfortable is not something most people do well, but CIOs looking to take charge must become comfortable with being uncomfortable. By moving toward digital transformation, you’ll inevitably be in uncertain positions — and that’s a good thing. According to the 2017 CEO Survey, CEOs want two traits in digital business leaders: open-mindedness and entrepreneurship for dealing with new business opportunities and threats.

Have the courage to say no

Instead of simply agreeing with the CEO when you know something is a bad idea, speak up. If ERP is a waste of money, say so. CIOs need to be able to tell people what they need to hear and not what they want to hear. If a new competitor on the market will take away 20% of the company’s market share, that’s something the CEO should know, even if it’s not something that’s positive. Nobody wants to be the bearer of bad news, but without that pivotal role, the enterprise will fail.

Have the courage to explain changes

The fact is that in the transition to digital, everyone will have to give up something that made the company (and them) successful in the past. For example, a part of the company that was key to success in the past might not have a place in the digital future. Some executives and employees might need to give up sole ownership of resources to run an area, or even the area itself. Make sure one group or person isn’t bearing all the loss.

Availability, leverage and use of data is being focused on, along with the focus on quality of data: Ashok Cherian, Page Industries

Page Industries is an Indian manufacturer and retailer of innerwear, loungewear and socks. It is…