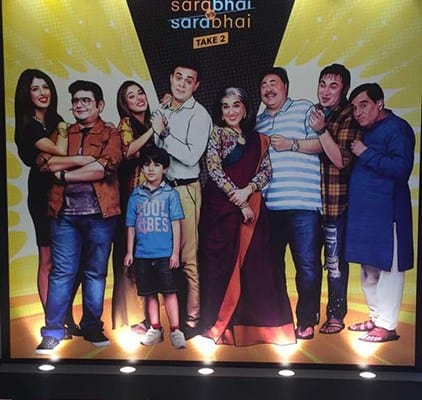 Sarabhai v/s Sarabhai has been one of the most loved TV shows on Indian television till date.  The show is coming back with a bang after 11 years on your mobile screen. Sarabhai v/s Sarabhai: Take 2 will witness the original cast of the show. This is the first time that a TV series have taken a digital makeover. The show is all set to premiere on hotstar (online entertainment platform) on May 16th.

According to reports, the web series will air twice a week on Tuesdays and Fridays. The show might see some new faces. After 7 year leap, Sahil and Monisha will now have a son and Rosesh (Sahil’s brother) will finally have a love affair, which will be played by Urvashi Upadhyay. Deven Bhojani will also be directing the new series, apart from acting in the same.

The teaser of the show has made fans enthusiastic to see their favorite cast on screen again. The only difference is that this time it will be coming in the form of web series on your mobile. We just can’t wait for Indravardhan’s hysterical dialogues, Maya’s sassy taunts to Indravardhan and Monisha, Rosesh’s mindless poems, Monisha’s middle-class logic and Sahil’s take on all this.

Recently, the one minute promo of the ‘Sarabhai Vs Sarabhai: Take 2’ was released and has received overwhelming response from the viewers. The promo claims that the show will be clean comedy and crazy sitcom which everyone will love.  It will continue to be as clean for consumption of families as it was in its first season.

Flipkart and Hotstar Come Together to Announce a New Ad Platform

In a first of its kind partnership in the industry, Flipkart, the e-commerce platform, and…