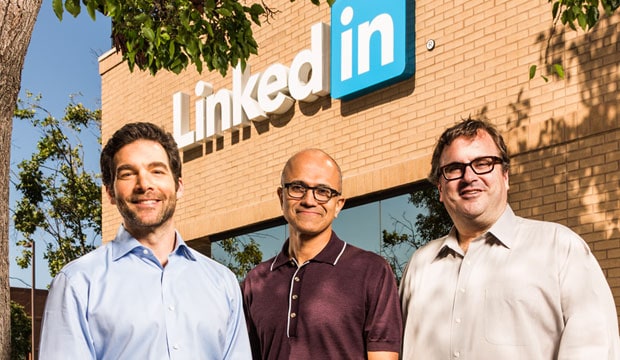 Microsoft’s announcement of its decision to acquire Linkedin for a whopping $26.2B, all in cash, has surprised and shocked many in the tech world. The deal which would be Microsoft’s biggest so far is even being referred as a turning point for tech M&As. Microsoft is known for its big bang acquisitions in the past but this one beats all its previous purchases, and also since its the first under the leadership of CEO, Satya Nadella, it is much expected to be under scrutiny.

The Linkedin acquisition is not just big in terms of the billion dollars being shed out by the software company on the purchase, but also in terms of its potential implications for businesses and working professionals.

With the two joining forces, it promises a great potential to transform the modern day workplace. The two companies apparently do not have any operational overlaps but their complimentary strengths when added up can clearly give them an edge. What Microsoft lacked until now was a hold in the social network space. And this acquisition helps it build that gap. Linkedin users can also possibly have access to productivity features from the Microsoft stable.

The combination of the social networking platform and the software giant can create intelligent possibilities for users. Like Nadela points out in the acquisition memo, “This combination will make it possible for new experiences such as a LinkedIn newsfeed that serves up articles based on the project you are working on and Office suggesting an expert to connect with via LinkedIn to help with a task you’re trying to complete. As these experiences get more intelligent and delightful, the LinkedIn and Office 365 engagement will grow. And in turn, new opportunities will be created for monetization through individual and organization subscriptions and targeted advertising.”

The implications could be far and wide, if not in the short run then over a few years time. TJ Keitt, Senior Analyst, Forrester Research, comments, “Initially, I don’t think this changes much for LinkedIn users. I don’t believe Microsoft purchased the company to significantly change a formula that has been working. Over time, it stands to reason that Microsoft may want to incorporate some of its communication capabilities into the LinkedIn experience. For example, it’s entirely possible that Microsoft could create a chat and voice capability within LinkedIn using Skype.”

Microsoft has often emphasized on the company’s objective to reinvent business productivity and processes. The acquisition of the professional network can be a huge step in realizing that objective. So, if we look at the bright side, besides what the acquisition will do for Linkedin’s and Microsoft’s businesses, this is one transition that can very likely turn out to be win-win deal for the millions of individual professionals and business users, provided that the two companies integrate successfully.

Commenting on how Microsoft might be looking at integrating the social network into its business, Keitt points out that Linkedin is a data acquisition for the software giant.  “A lot of Microsoft’s vision for the future of work is built around an intelligent system monitoring employees’ contacts, content and activities, providing workers insights on how they should proceed. That system is Microsoft’s Office Graph and it requires a lot of data on those three things in order to begin making useful connections. LinkedIn — with its deep repository of people and their connections — becomes a valuable input into the Office Graph. So, that’s one obvious integration for Microsoft.”

Integration as in all acquisitions, is going to be the key in this case as well. How well and how fast the potential benefits could be realized will depend on how seamlessly Microsoft integrates Linkedin and its information pool with its own software and services range to provide intelligent experiences to its users.