Someone wearing a smartwatch can look at a calendar or receive e-mails without having to reach further than their wrist. However, the interaction area offered by the watch face is both fixed and small, making it difficult to actually hit individual buttons with adequate precision. A method currently being developed by a team of computer scientists from Saarbrücken in collaboration with researchers from Carnegie Mellon University in the USA may provide a solution to this problem. They have developed touch-sensitive stickers made from flexible silicone and electrically conducting sensors that can be worn on the skin.

The stickers can act as an input space that receives and executes commands and thus controls mobile devices. Depending on the type of skin sticker used, applying pressure to the sticker could, for example, answer an incoming call or adjust the volume of a music player.

“The stickers allow us to enlarge the input space accessible to the user as they can be attached practically anywhere on the body,” explains Martin Weigel, a PhD student in the team led by Jürgen Steimle at the Cluster of Excellence at Saarland University. The ‘iSkin’ approach enables the human body to become more closely connected to technology.

Users can also design their iSkin patches on a computer beforehand to suit their individual tastes. ‘A simple graphics program is all you need,’ says Weigel. One sticker, for instance, is based on musical notation, another is circular in shape like an LP. 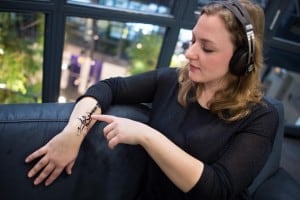 The silicone used to fabricate the sensor patches makes them flexible and stretchable. ‘This makes them easier to use in an everyday environment. The music player can simply be rolled up and put in a pocket,’ explains Jürgen Steimle, who heads the ‘Embodied Interaction Group’ in which Weigel is doing his research. ‘They are also skin-friendly, as they are attached to the skin with a biocompatible, medical-grade adhesive. Users can therefore decide where they want to position the sensor patch and how long they want to wear it.’

In addition to controlling music or phone calls, the iSkin technology could be used for many other applications. For example, a keyboard sticker could be used to type and send messages. Currently the sensor stickers are connected via cable to a computer system. According to Steimle, in-built microchips may in future allow the skin-worn sensor patches to communicate wirelessly with other mobile devices.

Software testing for wearable devices is becoming a major challenge