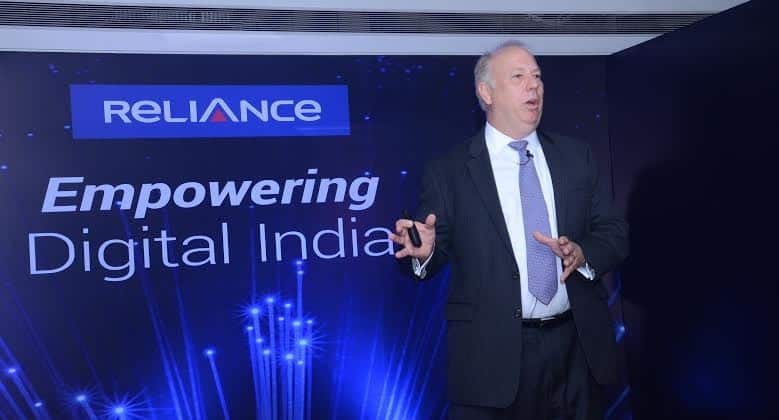 Bill Barney, a veteran in the telecom space and best recognized as ‘growth guru’ in the industry for driving revenues of companies, is currently serving as the Chief Executive Officer of Reliance Communications (Enterprise) and Global Cloud Xchange.  On the launch of Cloud X nodes recently, Bill Barney, sounded optimistic about the enterprise business and the Indian market.

In an interaction with Voice&Data, he talks about RCom’s strategy for its enterprise business and why data centers are its holy grail.

That’s not true. But at the same time, if you look at our cloud capabilities, our cloud services are growing faster than 100%, if you look at cross-border transactions to Indian enterprises going overseas that’s growing like 300%. But these are small members in the grand scale, and then some of our hubs are growing more than 10-20%.

But for somebody who has been labelled as ‘growth guru’ for the Indian market, what are some of your key focus areas?

Our focus is really on –getting into the fast moving streams. The Internet space is right now the fastest moving space globally.  Technology companies will boom for a very very long time. Financial services, believe it or not, are growing very quickly in the network space. So, those are the two sectors we are targeting very closely, because both these sectors are growing fast and spending quite a lot of money right now and they are also expanding globally.

One of the selfish reasons is you don’t require a salesforce anymore, so once you sell it to the customer connected to your network they can buy applications and services from you without talking to anybody. Today, we have a salesforce of roughly 600 people around the globe direct selling to customers. With this, each one of those cloud nodes everyday will be hit 4-5,000 times by customers.

Each one of the cloud nodes, they can sell itself. So, we will able to sell services and products through it.
Our view, over the next 10 years, is that the top 10-15% of our customers will actually have a very strong relationship and when these customers want to change their services they can do it themselves as they will have more control through our self-service option.

So, the relationship will be much more around strategy, helping them to grow. This is transformation in terms of how we operate in India.

What type of trends are you seeing among the enterprise customers these days, what type of questions are they asking, what are their concerns?

I think the enterprise customers are trying to do a couple of things. One is, they are trying to gear themselves up for cloud so they want to understand how they can do the savings that are required. Most CIOs are under pressure as they have to give more services to the end-users and have to take out minimal capital out of the budget.

The other challenge for CIOs is catching up with the consumers. An average consumer can access videos, send pictures and do video-conferencing over the phone, and most enterprise networks can actually allow this to happen. They actually have to catch up with the consumers because with young folks coming in and asking for different things, there’s going to be a challenge for CIOs as they have to build those networks and simultaneously have to take care of the security part as well.

And then Europeans, Americans are all coming into this market and chasing growth. They are targeting the age group of 25-30 as if you look at this age group their income goes up the most in 10 years in their lifetime so that’s the biggest opportunity here when we look at places like India and Middle East.

In the entire scheme of your enterprise business, where do you see OTTs?

There are lot of issues around investment in infrastructure because traditionally telecom companies require infrastructure investment. If you have a license, you have to build it so the challenge is what you do with the new players coming in.

We are revamping them, we are adding power, network, opening them up so that more supplies can come in and so that it’s not just a closed ecosystem within the Reliance group but other network providers can be here.

We are making it easier for them to come in because it’s good to open up data centers and we are also putting services into that…if you want to buy storage on demand you can get that on a temporary basis in our data centers. We never want to be server firm or massive storage operating centers, but we will have the ability for some IT loads to be housed there and used on a temporary basis for customers. When we deploy our nodes that actually come with typically some software compute capabilities and storage capabilities, customers can use them one day or two day whichever applications they want to run so there would be expansion.

If our strategy is successful, which I believe will be, we will be investing in data centers as they are the core of our network. That’s the focal point and revenues come from there.

How has been the response from India on the Global Cloud Xchange?

We have received a very positive response and customers liked it, they liked the new name too, the brand is different. The interesting thing is where the sector is going from where it was, we were launched as an infrastructure company now we have to be a people’s company so we actually have to transform ourselves from being infrastructure to humans just because when you get into the transformational IT space you are actually playing in the software defined networks it really comes down to the humans who actually run the networks and being able to move quickly at the edge.

We have to be more like a Silicon Valley company than a traditional telco. We are also trying to transform our employee base and becoming nimble but that’s going to take some time and also our sister companies are infrastructure companies and the challenge is that we have to be a bit different from them.

Posted by: DQINDIA Online
View more posts
Tags:Bill Barney, Global Cloud Xchange, RCOM, Reliance Communications
We have to be more like a Silicon Valley company than a traditional telco: Bill Barney, CEO, Reliance Communications 0 out of 5 based on 0 ratings. 0 user reviews.
The story of a remarkable turnaround: Anil Nair, MD and CEO, AGC Networks
EBS claims it can help you start your online business in 24 hours