Vodafone India, one of the largest mobile telecommunications network providers in India, seems to be facing some issues today. Vodafone users took to the popular social media platform Twitter to state about the connectivity issues they were facing since ‘several hours’.

“My Vodafone is not working since last night & I thought I am the only one facing issues but NO we all are the same boat,” says a user Mansi Shah. “How many of you faced this issue? While trying to accept the call in your phone, you will get voice message that you have dialed the wrong number,” says another user. 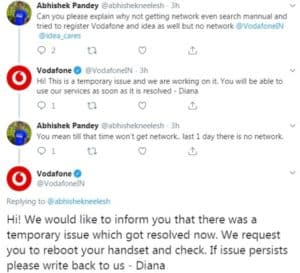 Those facing Vodafone network issues complained of calls either not getting connected at all or call drops, problem with getting data, as well as sending or receiving messages. While some reportedly started to face the problem today, others say that they have been facing this issue since the ‘past few days’.

“From last 2 weeks my Vodafone 4G connection is very slow and now this network is functioning as the slowest network..which is hampering my urgent works,” says Sreeja M on Twitter. A user also states that restarting the mobile handset a couple of times may help resolve the network issues. “If anyone facing #Vodafonedown or #vodafoneblackout issue today in India then try restarting your smartphone once or twice. I hope it might work. I did this and got my network back,” says Sachiin Suryavanshi.

Vodafone India has as of now acknowledged the problem and says that it was a ‘temporary issue’ that has now been resolved. “Hi! We would like to inform you that there was a temporary issue which got resolved now. We request you to reboot your handset and check. If the issue persists please write back to us,” says the official Vodafone India Twitter account.

At the ongoing India Mobile Congress 2021, there was a session devoted the roadmap for…