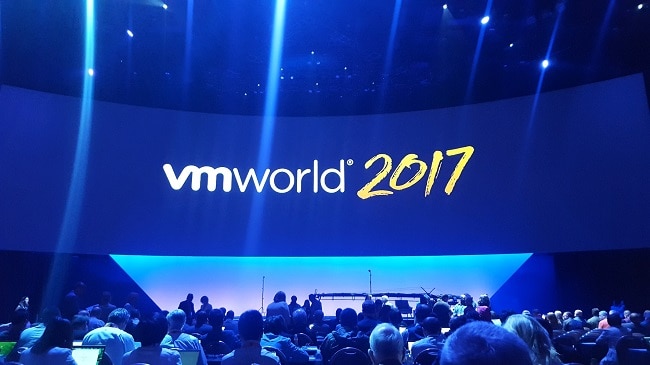 At VMworld 2017, VMware announced its solution for securing applications running on virtualized or cloud environments – VMware AppDefense. This new security solution leverages the virtual infrastructure to monitor running applications against their intended state, and can detect and automate response to attacks that attempt to manipulate those applications. Additionally, integrations with third-party solutions will enable a partner ecosystem to leverage VMware’s AppDefense unique application visibility and response orchestration.

“The growing frequency and cost of security incidents points to a fundamental flaw in security models that focus solely on chasing threats,” said Tom Corn, senior vice president, security products at VMware. “AppDefense delivers an intent-based security model that focuses on what the applications should do – the known good – rather than what the attackers do – the known bad. We believe it will do for compute, what VMware NSX and micro-segmentation did for the network; enable least privilege environments for critical applications.”

An intent-based security model is made possible through:

· Increased use of automation in application and infrastructure provisioning

· Increased use of virtualization and cloud, which provides greater application context and isolation

Leveraging VMware vSphere gives AppDefense several unique capabilities. First, it’s in a unique position to see rich application context; both run state and provisioned state. Second, it can leverage the hypervisor to create a protected zone from which to store intended state and monitor run time behavior. Third, it can leverage vSphere and NSX to automate and orchestrate response. The result is that AppDefense can significantly reduce the attack surface, making threat identification and response more efficient, and creating a more agile DevOps-friendly model for security.

“A security model concentrating on appropriate application behavior can help shrink the attack surface and improve the ability to pinpoint real threats,” said Jon Oltsik, senior principal analyst and the founder of ESG’s cybersecurity service. “With this focus on intended state behavior, AppDefense offers a productive alternative to traditional application and endpoint security. In this way, VMware AppDefense is shifting the focus from simply securing the virtual infrastructure, to using vSphere capabilities as creative enhancements to applications and infrastructure security.”

“Signature-based defenses alone are proving to be increasingly ineffective at preventing modern malware threats,” said Christopher Frenz, director of infrastructure and head of security, Interfaith Medical Center. “Effectively combating malware requires a defense in depth approach such as that laid out in the OWASP Anti-Ransomware Guide. Application whitelisting and network segmentation are a key part of any such defense in depth strategy, and are capabilities that VMware AppDefense and NSX help bring to the table.”

Initial partners for AppDefense include:

· IBM Security: AppDefense plans to integrate with IBM’s QRadar security analytics platform, enabling security teams to understand and respond to advanced and insider threats that cut across both on-premises and cloud environments like IBM Cloud. IBM Security and VMware will collaborate to build this integrated offering as an app delivered via the IBM Security App Exchange, providing mutual customers with greater visibility and control across virtualized workloads without having to switch between disparate security tools, helping organizations secure their critical data and remain compliant.

· RSA: RSA NetWitness Suite will be interoperable with AppDefense, leveraging it for deeper application context within an enterprise’s virtual datacenter, response automation/orchestration, and visibility into application attacks. RSA NetWitness Endpoint will be interoperable with AppDefense to inspect unique processes for suspicious behaviors and enable either a Security Analyst or AppDefense Administrators to block malicious behaviors before they can impact the broader datacenter.

· Carbon Black: AppDefense will leverage Carbon Black reputation feeds to help secure virtual environments. Using Carbon Black’s reputation classification, security teams can triage alerts faster by automatically determining which behaviors require additional verification and which behaviors can be pre-approved. Reputation data will also allow for auto-updates to the manifest when upgrading software to drastically reduce the number of false positives that can be common in whitelisting.

· SecureWorks: SecureWorks is developing a new solution that leverages AppDefense. The new solution will be part of the SecureWorks Cloud Guardian portfolio and will deliver security detection, validation, and response capabilities across a client’s virtual environment. This solution will leverage SecureWorks’ global Threat Intelligence, and will enable organizations to hand off the challenge of developing, tuning and enforcing the security policies that protect their virtual environments to a team of experts with nearly two decades of experience in managed services.

· Puppet: Puppet Enterprise is integrated with AppDefense, providing visibility and insight into the desired configuration of VMs, assisting in distinguishing between authorized changes and malicious behavior.