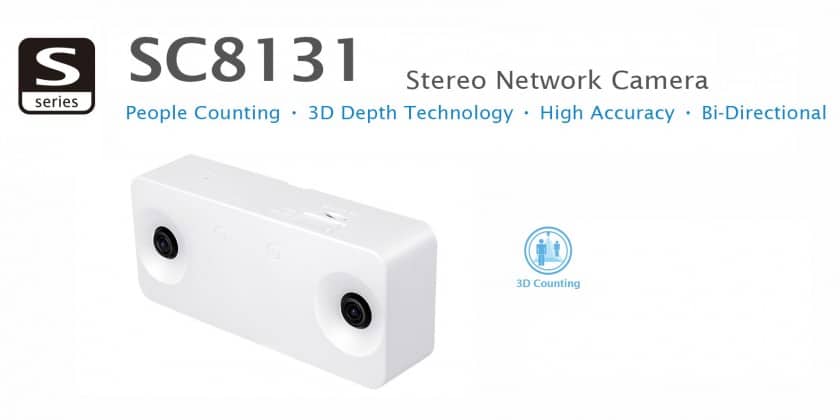 The SC8131 delivers 3 key benefits for the retail market, including

Accurate traffic analysis: Uniquely designed with a dual-lens, the SC8131 mimics the eyes of human beings. Thanks to its 3D Depth Technology with up to 98% accuracy rate, the camera can distinguish individuals or groups, adult or children, and filter out carts, and strollers. Furthermore, it obtains bi-directional counting on a definable flow and tracking a moving path, avoiding double counting caused by u-turns.

Optimize operating decisions: VIVOTEK is committed to helping retailers think ahead and maximize their ROI. The SC8131 enhances business intelligence via VIVOTEK’s central management software, VAST, which produces dedicated counting reports. These real-time reports can be exported by schedule or for areas in a line chart, bar graph or pie chart and directly exported into Snapshot. And all the data can also be exported to Microsoft Excel for analysis. Finally, VAST provides a seamless counting function, which secures counting data all the time, even during unexpected network or power disruption. With VIVOTEK, information vital to your business will always be on hand.

VIVOTEK has announced its strategic partnership with Regenersis (India) Private Limited (A CTDI COMPANY), a…

VIVOTEK, the global leading IP surveillance solution provider, has upgraded its product portfolio with the…