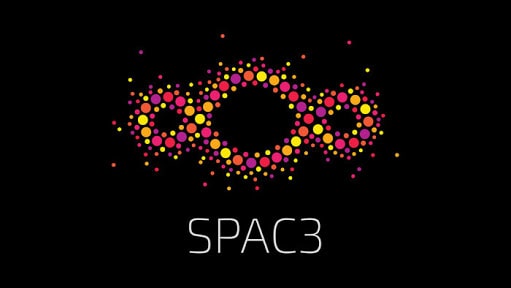 A long journey that began on July 28th, has adopted the symbol of the Third Paradise as the worldwide symbol of VITA, the third long-term mission of Italian astronaut Paolo Nespoli, in collaboration with ASI (Italian Space Agency), ESA (European Space Agency), RAM radio arte mobile and Cittadellarte – Pistoletto Foundation.

Vitality, Innovation, Technology and Ability are the words of the acronym VITA (LIFE in Italian), characterizing Paolo Nespoli’s mission. The Italian logo evokes profound meanings, from a scientific and a philosophical point of view. The design of the patch represents the mission’s main messages and it’s shape reminds us of planet Earth. It also contains the symbol of the “Third Paradise” that brings together, visually and conceptually, the main themes of the mission: DNA, a symbol of life and, broadly speaking, of the scientific dimension; the book, a symbol of culture and continuous learning; the Earth, symbol of the humanity.

This project aims to engage the whole world into communicating and sharing the work’s meaning and mission. Pictures by Paolo Nespoli will be made accessible to web users, through the «Space Three» App – SPAC3 – an easy-to-use application developed by ESA with RAM in collaboration with ASI and Cittadellarte – Fondazione Pistoletto – which will be available for IOS and Android smartphones. Following the proposed themes, the users will have the possibility to combine the space photos by Paolo Nespoli with the Earth images by the user within the symbol of the Third Paradise.

The images generated with this combination, once shared on the most common platforms (Twitter, Facebook and Instagram) with the use of the #SPAC3 hashtag will be displayed in a large, interactive mosaic (www.spac3.earth) using the shape of the Third Paradise, allowing everybody in the world to take part to this unique, dynamic Social Artwork.

“SPAC3 is a big artwork that connects all the people to the space mission – Michelangelo Pistoletto said – Science and technology goes on toward the Space with Third Paradise: in this way technology brings together the humanity in a big project of balance and harmony”.

The themes of intervention, inspired directly by United Nations global targets of action, will be indicated into the SPAC3 App, and displayed on 6 squared captions: