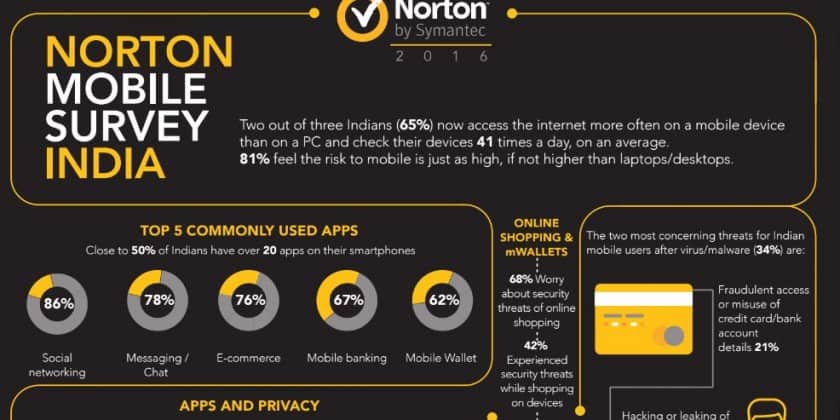 Norton by Symantec released the India findings from the Norton Mobile Survey that sheds light on the security gaps and the privacy risks smartphone and mobile applications (apps) present. It highlights that consumers in India are trading their personal information in exchange for free mobile apps, exposing themselves to privacy risks.

The Norton study reveals that two out of three Indians (65 percent) now access the internet more often on a mobile device than on a PC. In fact, the smartphone is often the first and only device used for accessing the internet. Highlighting the increased dependency and usage, respondents reported that they check their device an average of 41 times a day. While making calls continue to be the primary use of a smartphone, applications for internet browsing, communication and social media are just as important.

Mobile Security Concerns on the Rise
Mobile security risks are growing rapidly. Globally, out of the 10.8 million apps analysed by Symantec’s Norton Mobile Insights in 2015, almost 3.3 million were classified as malware, a 230 percent increase from 2014. The Norton Mobile Survey shows that the most concerning security issues for Indian mobile users were virus/malware attacks (34 percent), followed by threats involving fraudulent access or misuse of credit card or bank account details (21 percent) and hacking or leaking of personal information (19 percent). While four out of five (81 percent) consumers concede that security risks like malware, hacking and misuse of data, cyber stalking etc. on mobile devices were just as great, if not greater than those faced while using desktops/laptops, ironically a majority (nearly 60 percent) of them seem to be undermining the security of their devices by dismissing these risks as fairly minimal.

“In today’s connected world, mobile devices are more than mini computers in our pockets – they are digital warehouses storing our most personal moments and information, such as photos and videos, conversations with friends and family, health and fitness information, financial data and more,” said Ritesh Chopra, Country Manager, India, Norton by Symantec. “Yet, most consumers unknowingly put personal information which resides on their mobile phones at risk and compromise their privacy.”

Mobile devices are increasingly important to how we shop and pay – both online and in-store. Not surprising that e-commerce apps (76 percent) along with mobile banking (67 percent) and mobile wallets (62 percent), rank amongst most popular apps, preceded only by social networking (86 percent) and messaging apps (78 percent).

Interestingly, within India, users in Delhi (71 percent) indulge more frequently in mobile banking than those in Mumbai (63 percent), the financial capital of India. When it comes to mWallet:

· 52 percent of users believe their mWallet has come under threat as a result of using other apps on their devices, especially social media apps which pose greatest threats according to 27 percent respondents.

· This is not surprising as, on an average users find it safe to hold over 19,000 across their mWallet accounts at any given time.

Victims Lost an Average of 24 Hours Dealing With Mobile Security Issues
Experiencing security problems and nuisance like spam, cyberstalking, virus attacks and so on was by no means uncommon. Perhaps not unexpectedly, the most common nuisances that consumers complained of were junk texts and annoying pop up ads etc. (mentioned by over one in three). Worryingly, the same proportion also mentioned that they had experienced virus/malware on their devices. The victims also felt that these problems had taken up an average of over 24 hours to resolve.

Practicing Safe Mobile Behaviour for True Mobile Freedom
“As consumers in India increasingly turn to smartphones and tablets to provide them with access to information and digital experiences, they need to pause and take stock of how they may be compromising their security and privacy in return. Real mobile freedom starts with basic best practices like keeping the mobile software updated, being aware of app permissions, checking the reputation of the apps we download among others,” added Chopra.

As mobile security and privacy risks evolve, there are many steps consumers can take to protect themselves. As a starting point, Norton recommends the following best practices:

· Use Strong Passwords and Lock Screen patterns: Lock screen security is important, as it makes it more or less impossible for a thief to access your information. If a simple swipe is all it takes to unlock your tablet or smartphone, you’re leaving your information very vulnerable in the event of theft. Also, use different passwords for different apps and change them often.
· Be Vigilant: Being aware of SMS phishing scams is another essential measure. It’s not just emails you have to watch out for these days—phishing scams come in the form of text messages as well. Remember to trust your instincts; if a message seems suspicious, it probably is.
· Review Settings and Updates Regularly: Keeping your phone or tablet’s software updated is important, as is the case with your computer. If your mobile device isn’t regularly updated, it’s vulnerable to threats. You’ll also want to review your security settings on your device and make adjustments as needed.
· Download Apps From Official App Stores: Third-party app stores may not put apps through the same rigour as official app stores such as the Google Play Store or Apple’s App Store.
· Use A Reputable Mobile Security Solution: Consider using a security software such as Norton Mobile Security, it helps to use discretion when installing apps. Norton Mobile Insight, a proprietary intelligence tool, crawls over 200 app stores globally to determine and provide dynamic analysis of app behavior. It protects against Android apps that leak personal information/content from devices, change settings, place ads in the notification bar, and require high battery or data usage.