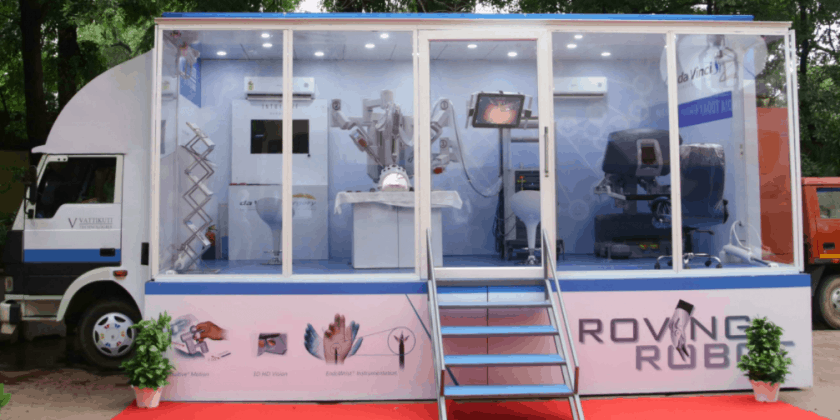 Robotic Surgery has recently made its mark in the healthcare sector in India and is helping surgeons to achieve higher success rate. Because of the precision and accuracy, robotic surgery is a way forward to save more lives. One such company which is working aggressively in the area of robotic surgery in India is a U.S. based firm Vattikuti Technologies. The company has provided hospitals and trusts with Da Vinci Surgical Robots.

With the help of surgical robots, the surgery is done more accurately. It reduces the chances of wrong cuts and helps patient recover faster as compared to open surgery in which the recovery time increases. There is little or no pain, as robotic arms enter the body via tiny incisions. Healing is quicker for patients; and scarring too is minimal. Experts bet big on robotic arms as they see more value in them and believe that there is an overall saving on time and money.

Vattikuti Technologies has witnessed a great success for their solutions in the Indian market and is so taking their solutions to smaller towns and cities. In order to increase awareness, the company is taking its state-of-the-art vans to hospitals in small towns to spread awareness about its products. The company is sure that the robotic procedures will be adopted in several cities and would be effective in the early detection and cure of the diseases such as cancer.

The company claims that it has deployed Da Vinci Surgical Robots in various government and private hospitals in tier 1 cities in India where it has registered 50% growth. It has done these deployments in Indian corporate chains, healthcare chains, government cancer hospitals and trusts in the last one year. The company now plans to expand its technology to tier 2 and 3 cities over the next six months by mounting the surgical robot on a mobile vehicle that will simulate an operation theatre setting. This exposure will help doctors in smaller towns to fight various forms of cancers such as gynaecology, thoracic, urology, paediatric, and head and neck area.

According to the National Cancer Registry, 15 lakh new cancer cases emerge every year which is a prevalence of over 30 lakh cancer cases at any point of time. Cancer claims over 680,000 deaths a year. Early detection saves lives but many patients detect it later. According to a survey, only one in eight Indians call on a doctor in the early stages. Amongst them only one in every three reported cases gets treated for cancer. The main reason is non-availability of cancer detection and treatment in non-urban areas. Vattikuti is keen to address this problem through its solutions and equip hospitals and healthcare institutions with the right kind of tools.

Besides, Vattikuti is aiming at addressing the challenge of doctor-patient ratio which is very bad in India. The drive to reach out to hospitals through its fully-equipped lab is expected to pay off and generate more awareness. Vattikuti Technologies and Intuitive Surgical will showcase the technology to surgeons and hospital administrators in 20 different cities over the next six months in the country. The Roving Robot will simulate an operation theatre environment on their vehicle.

Training doctors to operate using robotic arms is yet another challenge which Vattikuti wants to address in the country. It has tied up with colleges in the country to provide training to the surgeons. The company also claims to help bridge the training gap by supporting a pool of accomplished robotic surgeons.

How Vattikuti Aims To Transform Healthcare with Robotic Surgery

Robotic surgery is set to transform the medical sector significantly in India. But training doctors…