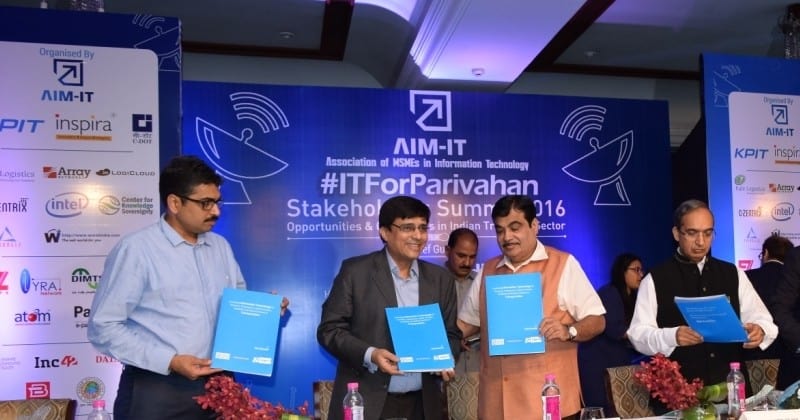 IT for Parivahan campaign was launched by Vinit Goenka, founder chairman of AIM-IT’S( Association of MSMEs for IT) . Addressing the audience, after unveiling the draft policy document, Goenka stressed on the importance of “smart technologies” such as OVSM (on vehicle smart module ) for revamping the transport sector in the country. Goenka stated, “IT should be used as a decision support system in strengthening, maintaining and upgrading national transport system. IT for parivahan can provide solution to the challenges we face today, but also prepare us for hurdles of tomorrow.”

On the occasion was present Union Road Transport and Highway minister Nitin Gadkari who advocated the use of IT in improving the logistical facilities in India. “We are monitoring 900 projects worth Rs 6 lakh crore. By monitoring , we can increase efficiency ” said Gadkari, at the launch of IT for Parivahan campaign.

“There are a few problems related to 21 projects that are valued at Rs 30,000 crore, but we will very soon resolve them. When our government took over, the length of national highways was barely 96,000 km of the overall length of roads which was 52 lakh km,” added Gadkari.

Sushil Kumar, Dy. Director General (IoT) talked about smart cities and shared his views on how machine-to-machine (M2M) communication. According to him, IoT can help in making cities smarter and turn transportation smarter.

The launch event saw participation from various stakeholders including central and state ministers, bureaucrats, start-ups innovators and policy makers. Discussions were held on varied topics such as, the future of smart shipping and smart road networks, “Start up India”, enabling efficient logistics and smart roads. The best part of this campaign was that it received an immense response across varied segments such as common citizens and IT sector.

Posted by: Joyce Mary
View more posts
Tags:IT FOR PARIVAHAN, Nitin Gadkari, transport
Use of IT, a must for better transportation, says Nitin Gadkari 5 out of 5 based on 1 ratings. 1 user reviews.
Dell launches SharePlex
EMC modernizes customer service experience