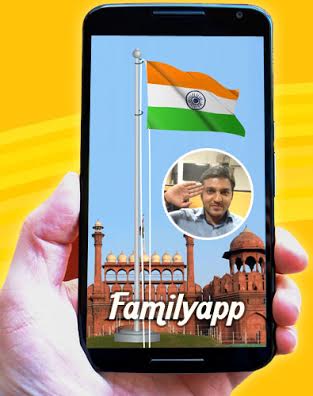 Trendyworks, a technology company, brings to people a unique Independence Day app to celebrate this special day in a very special way. The app named ‘FamilyApp’ for the 1 billion+ family of Indians is available on Google play store and provides a unique Independence Day celebration opportunity for citizens of India. Through the ‘FamilyApp’, one can experience the pride of hoisting our National flag from anywhere in the world in a single click.

How common is it for an individual to be a part of flag hoisting ceremony during Independence Day celebrations? Other than school students, few Government employees and politicians, rest of the population is not part of the real flag hoisting ceremony and most of the times one watches the proceedings at the Red Fort on TV. While it is a sign of patriotism that one makes an effort to watch the celebrations on TV, nothing can replace the pride and joy of experiencing it yourself, the emotions one feels when our National Flag is hoisted and the Nation Anthem is sung.

To recreate this emotional bond with our country and patriotic fervor experienced while participating in a real flag hoisting, Trendyworks built this Independence Day flag hoisting feature in the ‘FamilyApp’.

Once you download and open the app you will see the folded National Flag on a pole. The app works on voice commands and the flag rises along the pole when the user saying ‘Jai Hind’. The flag is completely hosted when ‘Jai Hind’ is said three times. The Flag unfurls to a resounding tune of the National anthem which ends with Prime Minister Narendra Modi’s triumphant call of ‘Jai Hind’. The lyrics of the National Anthem are provided in 10 languages English, Hindi, Telugu, Tamil, Marathi, Gujarati, Bengali, Malayalam, Kannada, and Oriya for users to sing along. The best part is you can take a selfie with the National flag and share it with your friends on Whatsapp and Facebook.

Commenting on the app, Neeraj Jewalkar, Founder, Trendyworks said, “With Independence Day around the corner we decided to launch the app as a tribute to the Nation and enable people to reconnect to their Indian roots. We hope that the Flag Hoisting feature in the ‘FamilyApp’ will emphasize the sense of strength and invincibility one experiences about being a family of 1 Billion proud Indians taking on the world with confidence.”

Mr. Neeraj Jewalkar an alumnus of IIT Khargapur is a serial entrepreneur and an angel investor. ‘FamilyApp’ is the latest offering from his portfolio.