The computing world has reached at an inflexion point. Microsoft – a company which ruled the PC world for since November 1985 – stands forced to metamorphose its revenue model for the world famous Windows operating system. Windows has dominated the world’s personal computer (PC) market with over 90% market share, overtaking Apple Mac OS, which had been launched in 1984, a year prior to the Windows launch. It was a rosy ride as Microsoft Windows sold effortlessly like hotcakes. Its graphical user interface (GPU) was a great innovation. Till 2010, despite the challenges and criticism at times for various its versions and launches, it had no near competitor. The growing influence of Android – both in the smartphone and tablet space – significantly challenged its business. As a result, in 2012, Microsoft Windows sold less than Android. Android became the preferred choice for corporates which bought portable devices for their sales people and on-the-move employees. Dependence on PCs and notebooks diminished. And Microsoft struggled to grow.

Taking on both Android and iOS, Microsoft is all set to launch Windows 10 which sports a lot of cool features for users. It knows that its OS has to be able to server every purpose of the computing world irrespective of the form-factors. Microsoft has kept in mind the future of computing and so have built the latest OS.

What are the features Windows 10 have in store and how are you going to be benefited from them? Let’s explore… 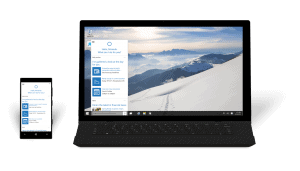 If you are using Windows 7 or 8, you are eligible to upgrade to Windows 10 free of cost. It is an unprecedented move in the history of Windows. Microsoft has never sold it for free though it has given discounts for users who had recently bought a PC-enabled with the previous Windows OS.

One response to “Top 10 Must-know features of Windows 10”