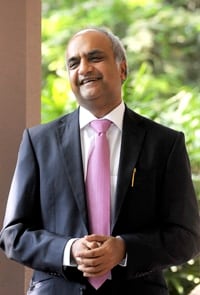 Tally Solutions is one of India’s biggest success stories in the software product space. It took some major breakthroughs and traumatic transformations to be where it is today. And the ride continues as Tally now targets yet another dream of being the tech fabric of the world by 2030. Its visionary leader, Managing Director and Co-founder, Bharat Goenka tells us how the company continues to chase far-sighted and impossible dreams.

You have been in the industry for about 25 years? Can you take us through some of the major highlights or transformations your company has been through?

If we break it up into five five-year periods, the initial breakthrough was creating a software that people like my father could use, who refused to learn about computers. Those were the days when technophobia was tremendously high in the country. After the first breakthrough, in the first five years the biggest turning point that happened was only in the third or fourth year. That time we had around 1000 or 2000 customers. Yet my father made a very important and far sighted statement—there are only two types of businesses, those who use Tally and those who will use Tally. More or less our journey started from there. From there onwards we started walking two paths on an upward spiral. One was the technology path , what all we required to crack such that we can make that statement come alive. The second was the operations part, that what kind of policies and what kind of outlook towards operations would allow that vision to come alive. It set the path clearly for us that we have to be a product company. In order to achieve that you can’t be a service led company.
For us support was not a source of income it was a source of engagement. So, the next five years created the foundation of the way the company ran. We started creating the ecosystem, and started creating the indirect channel and none of those concepts existed in the country in those days. By the end of the first decade, the momentum had picked up. Simultaneously the hardware industry started finding its feat and the SME penetration of hardware had just started. In that decade, the most important contribution that we brought to the industry was bringing the LAN to the SME. It was amazing that how the concept of LAN rode on top of Tally.
The end of the second decade is when we took our biggest architectural technology change. We came out with a decision that we will stop development on 8-bit and will come out with a pure 32-bit environment, simultaneously moving on to the graphical environment. By that every five years, new companies came and old companies died, but we remained stubbornly on our track. By that time the services business in the country had really taken off and everyone was jumping into the bandwagon. We moved from 80 to 800 people and we faced the tremendous trauma of doing that and trying to deal with the organizational chaos we created.

You made a very strong statement that SMEs won’t come to the cloud? What technology or business models are going to help in reaching out to this untapped market?
SMEs won’t come to the cloud by their own, it doesn’t matter it is cloud or something else. You have to go to sell. Today we are at the cusp where on one side you have got this PC window legacy on the other side you are looking into a world that is now moving into a post PC, post windows and occasionally disconnected era.

The question that we have been asking ourselves in the last two-three years is how do you think businesses are working in this new environment. How do you think of business systems that will operate in a connected world? So that’s the architecture we have been building and that’s the way we think about how cloud can be leveraged. It is not about taking an application and putting it into the cloud it is about leveraging the cloud to connect companies to each other and also to other institutions like banks, governments, etc, enabling access to information for SMEs that they never had.

You hinted on something major happening in the next two years, can you give us little insight into what areas
you are working on?
There are two broad directions we are working on. The one direction is immediate. The immediate is not transformational in the architectural perspective but at the same time it is going to be transformational from a functional perspective. Like how companies In India can cope with the plethora of indirect taxes. Then we have been working on our new architecture which is literally building from scratch. One block, which we are using internally right now, is a concept we call as Tally Space.

The concept of tally space is you will have your data on tally space, it will reside on your device or in your office, you may even take public infrastructure, it can simultaneously exist in more than one place. For you, you will only have a concurrent  single view of all your data. Second is the concept of Tally Scope.

The whole concept of Tally Scope is to abstract the way you do your technical implementation, from my technical implementation and we are now going to be able to talk to each other without worrying about how you deploy your technology versus how I deploy my technology. Once you have done these things then it becomes possible for people to collaborate with each other.

Are organizations okay with a collaborative kind of accounting and financial management system? What
could be the possible challenges?
Challenge is in the ability to reach out. At the same time, it is also about the concept. So how do you have enough one to one conversations with people that they accept the concept? It is not about acceptability happening because of people understanding it, it is acceptability happening because you are able to make people understand.

Is this the basis on which you are making a statement that by 2030 you want to be the technical fabric for the
economic growth of the world? Also, do you think the tag of ‘Made in India’’ comes in the way somehow?
Honestly the answer is No. Let’s take any organization in any part of the world, each of them would be running typically
anywhere between 10 to 20 software packages. If you ask them do they know the country of origin of those software packages, the reality is they don’t even know. Everyone is only bothered that whether it is the right product and it has got the right reputation. The reputation is not about origin it is about usage. That’s at one level.

At the second level, the way we are looking at our future is actually not looking at Western Europe and US as our immediate target market. Around 80% of the world’s physical footprint is the emerging markets which is an un-served market. The cost of serving the market and the potential earning from it is not attractive for anyone.

There we have a significant advantage in being an Indian company. We also learnt one thing, in the previous decade, from the successes and failures of other MNCs in the world. Let’s say a US based MNC that operates in India, the sales network of the company in US and the number of people it has got in its sales department will be significantly higher than in India. India is not treated as a market large enough to afford that kind of investment. And that’s the way most companies have addressed global markets.

This realization has been there. Recently we opened our office in Kenya and the objective was identical that if I have to succeed in Kenya with the same kind of dominance we got in India, I need to have a similar presence in Kenya as in India.

Going forward, how do you make sure that the farsighted objective of making Tally a global power is realized?
When your bets go well you get spectacular success, when your bets go bad you get dire consequences. For example, that 80 to 800 move, we spent five years to recover from that. There is absolutely no doubt that the end outcome is dependent on how many of the bets to achieve this outcome in a given point of time go well and how many of them go bad.

One DNA that we are perpetually trying to keep alive is not allowing the consequences of things going bad to reduce the risk taking ability. We have broken down our objective of being the technology fabric and broken it down saying that this means more than 75% of the countries and more than 75% of businesses in each of these countries are using our technology to run their operations. If that happens, we can say that we have achieved our objective.

Inspiration behind GATE60 scientific calculator was pain felt due to failure in securing desired rank in GATE: Gate India Electronics

Gate60 is an ed-tech tools startup based in Visakhapatnam, India. It was formed to create…

Simple for humans but too complex for robots

How close are we to hitting full speed on a lights-out factory, product traceability, robotics,…