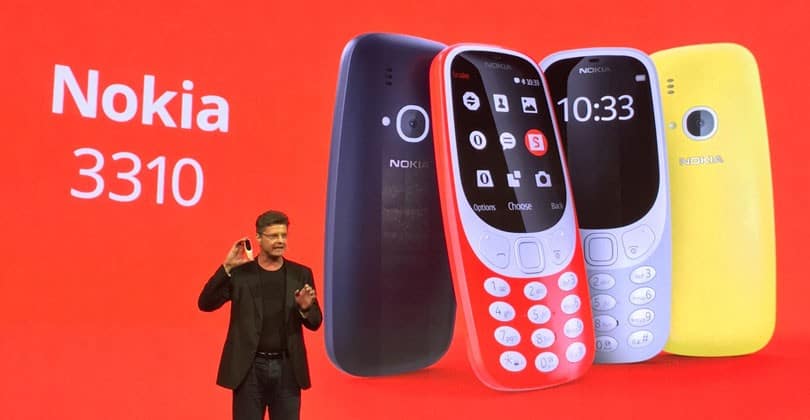 A revamped version of the Nokia 3310 has been launched nearly 17 years after its debut at MWC 2017. Finnish company HMD Global revealed feature phone Nokia 3310 along with three android phones at the Mobile World Congress 2017 in Barcelona. The Nokia 3310, famously known for its physically strong body is now embodied in four different candy colors with a modern-classic combination body. The silhouette interface has also been upgraded to a colored one.

The ruggedness and durability of the  handset has always been the best feature of the phone, other than the “Snake” game. Now, the updated version of the phone has a bigger display along with the comeback of Snake. Nokia claims of having 22 hours of talk time which is 10 times more than what the original one had. Incorporating a 2 MP camera with LED flash, the 3310 handset gives the option of choosing between single or dual sim handset.

• Nokia 6– 6 is a phone with 5.5 inch full HD screen. Its body is crafted from a single block of 6000 series aluminum. It has smart audio amplifier with dual speakers which support Dolby Atmos.

• Nokia 5– 5 is a smaller phone but very similar to the Nokia 6. It has 5.2-inch screen with HD resolution. Nokia 5 is powered by Qualcomm Snapdragon 430 processor.

• Nokia 3–  3 has a 5 inch screen and has 8-megapixel cameras on both front and back. It has a metal frame but plastic body.

In 2016, social media platforms were flooded with posts, memes and videos showing how users felt about the absence of the indestructible Nokia 3000 mobile series. The videos showcased how these phones would survive drop tests and wall smashes and rather leave a hole in the wall. This is why the comeback is being seen as a good news for the Nokia enthusiasts. The phones are expected to be available in Q2 2017 for its Indian users.