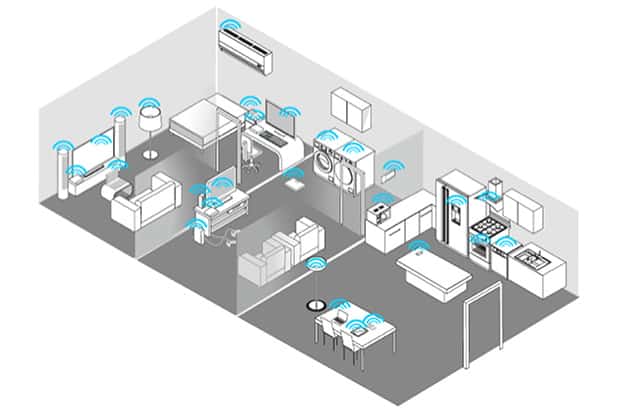 We have been enjoying the wonders of home automation for decades now with popular appliances such as washing machines, food processors, air conditioners, microwaves and a host of others that have improved our way of life. Many of these products have gone through multiple evolutions and generations, adding capabilities along the way.

In fact, automation in many home appliances seemed to be peaking. Although these appliances had incorporated relatively sophisticated automation and control, they still required a human to invoke action or were set to run on a schedule. Managing appliances with remote controls using line of sight Infrared (IR) or short distance Radio Frequencies (RF) had also reached its limits.

Fortunately, other technologies, such as smart phones, started coming to the forefront, presenting opportunities to advance home appliances in a completely new direction. “Smart” started to permeate devices all around our households. Interest in communicating with home devices from outside the home increased, and as communication methods expanded beyond the TCP/IP protocol used by the Internet, this created greater demand for a lightweight protocol that could be used to communicate with appliances. The result: a surge of products was built to leverage newer protocols, such as Bluetooth, ZigBee, and Z-Wave, and traditional appliances and devices, including light bulbs, power switches, light dimmers, garage openers, door locks, outdoor sprinkler systems, smoke alarms, and thermostats, got smarter.

The next challenge was to create a gateway that could control this diverse set of devices. Today, there are a number of gateway hubs in the marketplace that solve this problem. Among the popular ones that have significant market penetration are Wink and Samsung SmartThings.  Other hubs that have somewhat more limited capability include the Insteon Hub, the Lutron Smart Bridge, Staples Connect Hub (which is a D-Link under the hood), Lowe’s Iris, and not to be forgotten, the Apple HomeKit. Most of these hubs integrate with other products and bridges (such as the Phillips Bridge to manage Phillips light bulbs) that operate on a base protocol, similar to a Z-Wave device. These Connected Home gateway hubs provide a wide range of functionality by enabling the key protocols (e.g. ZigBee, Z-Wave, Bluetooth Low Energy, etc.) needed to operate a Connected Home, though they are not designed for Internet Protocol (IP) management like Internet routers are.

On the surface a Connected Home looks simple to install and configure. And, it can be as simple as hooking up the Connected Home hub to the power, answering a couple of questions about your network, installing an app on your mobile device, and then through a guided set of instructions, screwing in a couple of light bulbs and motion sensors. Now you can check status and control each device even when you are not at home—the Connected Home has landed!

Of course, each home and the needs of each homeowner are different, so the array of products and configurations for the Connected Home is diverse. This is where it gets particularly interesting, as gateway hub vendors such as Wink, SmartThings and others have created an ecosystem of Robots, Shortcuts, Recipes and Routines that can be easily customized for a home. For example, you can set up a virtual robot that detects when your garage door is opened. If the garage stays open for more than 15 minutes, the robot can send you a SMS or notify you by email. This is helpful for people (like me) who can’t remember if they closed the garage door when they left the house.

These configurations can also manage appliances, detecting when you are away and turning appliances off. Or, the smart phones of household members can be used as presence sensors, so when no one is at home, the thermostat switches to an energy efficient mode. These types of configurations can also be extended to a group of devices. For example, if the smoke alarm sounds at night, the robot can be configured to turn on all the lights in the home. Light groupings can also be specified by room or to create a specific mood, such as setting the lights to warm colors in the evening.

Along with the capabilities offered by robots and recipes, these systems make it easy to create shortcuts for common tasks. For example, a command to turn off the backyard lights can be grouped as a shortcut. These shortcuts are saved as widgets on your smart phone, so they are easy to trigger. Shortcuts are also being extended to wearables; for example, Wink has made shortcuts available on an Android SmartWatch, so you don’t even need your phone to invoke action.

Home security solutions have also advanced significantly for the Connected Home. The Aeotec MultiSensor 6 has a wide range of sensors packed into one solution that can sense motion, temperature, light, humidity and ultraviolet light. This can be paired with a Smart Camera that triggers video recording if it detects motion in your home when everyone is away.  The common doorbell has now transformed into a smart product called Ring that has the capability to capture video and invoke your smart device when someone is at the door, so you can attend to the visitor, even when you are away.

Another great addition to the Connected Home portfolio is the IFTTT, which is essentially a method to run a task when a specific event is detected. It stands for If-This-Then-That. This is a versatile tool that enables you to configure your home systems to external events. For example, if you are away and it is raining, then you can set an IFTTT recipe to turn off the sprinklers when it detects rain in your area. The IFTTT ecosystem is rapidly expanding with a number of channels coming online that detect events, including outside the home. The Automatic OBD-II Connector for vehicles, for example, can sense that you are out of gas and inform you that you should fill up before the next trip.

Voice command response is another growing capability within the Connected Home. While voice control has existed in limited form, the Amazon Echo has advanced this type of control for many products, including lights, switches, speakers, and more. The Echo can be configured with Wink, SmartThings, Insteon or an ecobee hub. Invoking action is as simple as giving a voice command, started by saying the Hub’s name, “Alexa,” to get its attention. For example, you can configure a number of lights under a group called “Foyer” and say, “Alexa, Turn Foyer On” to turn on all lights in that group. The release of the AppleTV and the new “Siri” integrated remote has also brought Apple’s HomeKit into this realm. Though there is much more to fine tune, voice integration is going to be a valuable addition to Connected Home configurations.

Just like any modern convenience when it’s early in its lifecycle, there are some rough edges and kinks to work out in order to get a Connected Home up and running. Yet, innovation will continue, complemented by advances in other “connected” experiences, such as the Connected Car, Remote Healthcare, and the Smart City. Over time, daily mechanical and mundane tasks will continue to be delegated to physical and virtual robots, giving you time to do more creative things.

Posted by: DQINDIA Online
View more posts
Tags:Automation, connected homes, IFTTT
The evolution of the connected home 5 out of 5 based on 1 ratings. 1 user reviews.
Brocade advances leadership in fibre channel storage networks with industry-first gen 6 switch
Why a reactive approach to enterprise security can cost you a lot