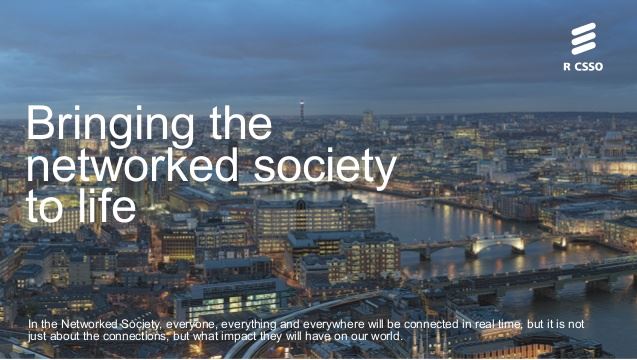 Over the past decade, ICT has started to play a much larger role in society and has begun to challenge how our economic system is understood and structured. Technology no longer just improves the productivity and efficiencies of large-scale companies; instead it has started to tear down institutional barriers and place control of content into the hands of end users. It also connects not just people but industrial systems and the physical environment in new ways that challenge the existing operating structure of many industries.

In 2005, critical thresholds were simultaneously crossed in various parts of the technology value chain. Initially, only ICT companies felt the most dramatic impacts of these thresholds being crossed – for example, the service layer of the mobile industry was completely reformed with the introduction of the iPhone. Technology soon began tearing down more entrenched barriers between people, industries and systems. A Networked Society was born – one where technology would play a fundamental role in the development of economy and society.

Over the next few years, however, this Networked Society combined with the results of a heavily financialized economic system to create a challenge not just to the established structure of the technology industry, but also to the very foundations of our economic system as it has been understood since the beginning of the last century. This Networked Society demands that we re-examine some of the very fundamentals of economic theory in order to properly understand how “digital” is interacting with them.

The current forces at work in our world require us to identify the economic fundamentals of this Networked Society so that we are better equipped to build effective and appropriate strategies in an era defined by resource constraints, population increases and the restructuring of global power bases. Understanding these characteristics is also critical to design the next generation of technologies and companies as technology and the economy become more deeply intertwined with one another.

Ericsson’s recent report outlined some of the basic fundamentals of the “Economics of the Networked Society,” bringing together six in-depth analyses. The combined forces of semiconductor speeds, open APIs, mobile broadband speeds and financialization have created computational capacity. These forces are working together to tear down barriers between people, objects and sub-systems of the internet. They are creating new types of platforms and allowing people to connect in unique and innovative ways. Through this, they are digitizing many industries and redefining the way we work, socialize, play and gather wealth. Through modularization of the factors of production, individuals and smaller companies are able access capital, labor and increasingly, land, much more easily.

More importantly, however, these technologies are now giving rise to a redefinition of some aspects of the economic system. Previously, ICT reinforced economies of scale and the boundaries of the firm. Now, digital solutions are providing a means to reduce the size of the firm and allow individuals to manage transaction costs more effectively – often without the boundary of a firm. Individuals are now able to work together in dynamic strategic networks, applying economies of aggregation, rather than economies of scale. Powered by mobile technologies, 3D printing and manufacturing in these economies allow smaller, often localized supply chains to compete with globalized production chains, enabling end users to take control and power over supply chains. This does not mean that globalized supply chains will come to an end, but that they will start to co-exist alongside localized ones.

This is far from the final evolution of the Networked Society; in fact, it is just the beginning. We can expect many more far-reaching changes to our economy, society and environment as a result of the forces that were unleashed in 2005. As a result, ours is a generation with many responsibilities – not the least of which is to use digital technologies to balance local and global, large and small, while ensuring that workers retain their rights and the possibility for wealth creation.

Posted by: DQINDIA Online
View more posts
Tags:Cloud, ericsson, networking
The Economics of the Networked Society 0 out of 5 based on 0 ratings. 0 user reviews.
I pretended to be dead for over an hour: Paris terrorist attack woman survivor remembers the tragic night
Technology Driving Disruption in Retail

Why Cloud is an essential foundation of successful digital transformation?

As the world battles COVID-19, enterprises globally have embraced working from home. In a matter…

Rapyder is an agile, innovative company that makes Cloud work for you. With a young,…