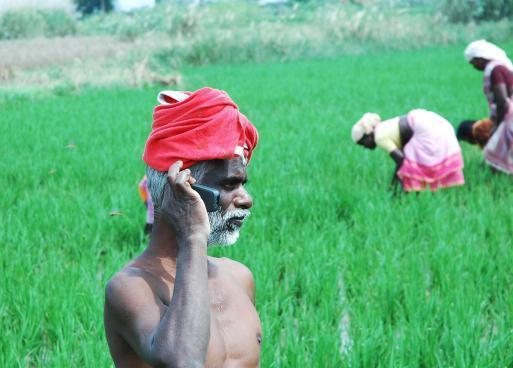 Driven by the increase in low-cost mobile phones and data plans, the number of mobile phone users in the country has almost crossed the billion figure mark. According to KPMG (consultancy firm) and IAMAI (Internet and Mobile Association of India), the number of mobile Internet users in India is projected to cross the 400 mn mark by 2017 from 306 mn users at the end of 2015. Moreover, it is expected that, by 2019, more than the third of the total population worldwide will have a smartphone.

The upsurge in the usage of mobile phones in India is primarily driven by:

Digital India Initiative: Government’s Digital India initiative acts as a catalyst in this growth that encompasses offering Internet access to all by promoting digital literacy, building robust infrastructure, delivering innovative content and services from web and mobile phones, and improving e-governance with the objective to augment tele-density in rural areas.

Low Cost 3G Internet Connectivity: The entrance of a large number of private internet service providers in the Indian broadband market has allowed people to enjoy low cost internet connectivity on their handsets, even without Telco subsidization. Last year, the subscription of 3G services in India increased considerably. And it is expected that it will further rise in the coming years as more and more people are switching from 2G to 3G. It is projected that it will grow at a compounded annual rate of 61.3% from 2013-17. There will be approximately 284 mn 3G subscribers in the country by end of year 2017. Besides, 80-90% of reduction in the 3G tariffs by several telecom operators led to the increased growth of mobile phone users in India.

The Wave of 4G: 2016 is going to be a very significant year for the mobile industry as India is rapidly rolling out high speed 4 G networks on a much larger scale for the first time. It is expected that the number of 4G subscribers will reach 30 mn by the end of 2016. It will grow at a CAGR of 103% till 2018. The fourth generation service will provide the fastest mobile internet connection. Moreover, the strong competition among mobile service providers will help people to get quality data networks at the least possible price.

Rich Media Content: The important driver for the growth of mobile Internet in India and the mobile data consumption is the adoption of meaningful and persuasive media content. This is attributed to the fact that the traditional services like SMS, voice are gradually being substituted by mobile data services such as social media, chat, video, email and apps. Such media content is gaining momentum due to its ability to fulfil diverse needs of consumers.

Increase Demand for Internet Based Services: There is a huge penetration of people who demand for Internet-based services through the mobile medium. Mobiles have transformed digital video watching to a surprising extent. YouTube alone has billions of views and out of these, 75% views are consumed from a mobile device, such as smartphones, feature phones and tablet computers. Moreover, there are almost 1.39 bn monthly active users while 894 mn users access facebook daily on mobile.

Where Are We Falling Behind?

Though India has the third largest Internet user base in the world, with more than 50% being mobile-only Internet users, but it is nowhere close to other developed economies such as the USA and China. This might be due to the low penetration of mobile phones in the rural areas of India. Where urban India has a total of 557.27 mn mobile subscribers, rural India has only a total of 403.31 mn. Lack of telecom infrastructure in semi-rural and rural areas could be the main reason behind such unsatisfactory penetration. The current level of rural tele-density in India is merely 40%, while the urban tele-density stands at 152%, which point towards the fact that a majority of Indian population still do not have access to telecom services. There are about 55,700 villages in India are remained untouched by the telecom revolution witnessed in the last few years.

For tapping rural area, big players of mobile industry need to sell handsets with multiple language support as it is found that a majority of people in rural India use Internet in local languages, forming 57% penetration. IAMAI also claimed that the current mobile user base will grow to 87 mn by the end of this year, and will predominantly be due to content in native language. While rural mobile users access the net for entertainment, urban users use it most for communication and social networking. According to Vuclip’s survey, around 78% Indian mobile users prefer watching video content in their native languages. Hindi videos account for over 40% of viewership traffic in India, followed by Tamil at 8%, Telugu at 6%, Bengali and Marathi at 4% each. Moreover, there is need to bring the robust 2G and 3G network coverage to drive mobile phone and Internet penetration in rural India.

Rural markets will also be poised to offer marketers vast scale and extensive reach. Therefore, a few local initiatives such as mWallet or other easier payment gateways were also taken by marketers in order to facilitate penetration of mobile phones in rural areas of India.

After getting a fresh look from NOFN to BharatNet, the project is once again seeing…