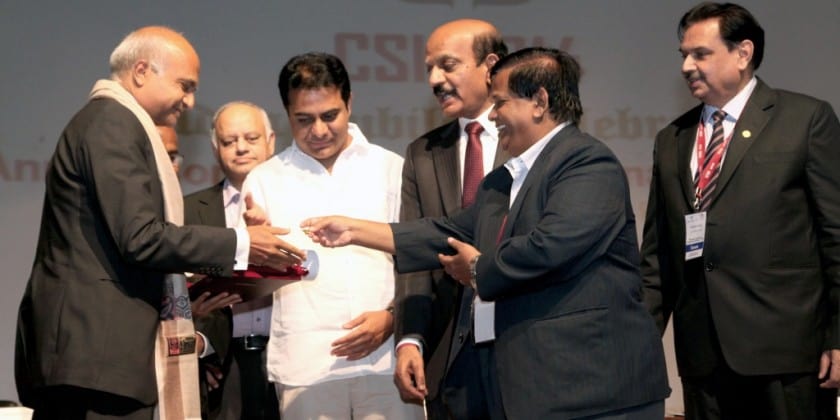 Bharat Goenka, Co-founder & Managing Director, Tally Solutions  has been recognised  for the ‘CSI Honorary Fellowship Award – 2014’ by the Computer Society of India (CSI), one of the largest professionally managed associations of IT professionals in India. Goenka was felicitated with the award at a ceremony, as part of CSI’s 49th Annual Convention & International Conference 2014, which was held from 12th – 14th Dec, 2014 in Hyderabad, according to a media release by the company.

The Telangana State IT Minister, K.T. Rama Rao gave away the award while Prof. S V Raghavan, Chairman, Awards Committee, and Scientific Advisor to the Govt. of India read out the citation on  Goenka’s contribution to the Indian IT industry.

According to company sources, Goenka has contributed significantly, over the years, towards creating a definitive identity for software product companies in India. Under his direction, Tally Solutions has grown to be a market leader in business management software in India and has begun making significant inroads in global markets as well. This is only the twelfth time the ‘CSI Honorary Fellowship’ has been awarded in the 49 years of CSI’s existence.

The event was also attended by the Union Minister for IT and Communications, Ravi Shankar Prasad, H R  Mohan, President of CSI  and Sanjay Mohapatra, Secretary, CSI.

NFL Recruitment 2020 is currently underway for as many as 140 Trade, Graduate and Technician…