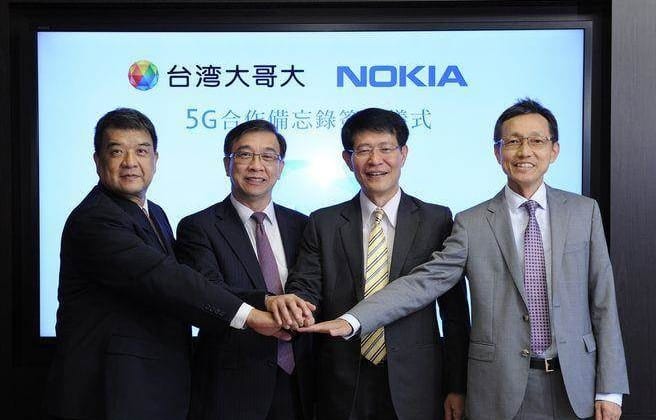 Two years ago, when both the governments of India and Israel had signed a Memorandum of Understanding (MoU) to develop 5G technology in their respective countries by 2020, another recent development has taken place. In a similar scenario, telecom major Taiwan Mobile Corporation announced that it has signed a MoU with the Finnish company Nokia, to jointly develop the next telecom service, 5G or fifth-generation technology.

According to the MoU, Taiwan Mobile and Nokia will expand their collaboration step by step. In the upcoming network, both companies will develop innovative technologies, the internet of things (IoT), spectrum arrangement and other applications. Taiwan Mobile said it would step up 5G research and development by September this year and would be ready to be the first wireless service provider offering a 5G service in Taiwan, probably by 2019.

Taiwan Mobile General Manager James Cheng said that – “By signing the MoU with Nokia is important for Taiwan to march toward 5G technology. In the future, they will not only make technology breakthroughs and integrate resources, but also kick-start a new era of information and communication technology applications, via thorough network, application and end-user preparations.”

Cheng further suggested that – “If the government opens up the experimental network spectrums before formally releasing 5G spectrums to businesses, it will aid teleservice providers in their 5G development quest. The goal of providing customized internet service will become a reality through cloud technology virtualization and network evolution from “IP” to “IT” in the 5G era”, Cheng added.

Wang Jian-ya, the head of Nokia’s Greater China operation, said that – “It was very meaningful for the two companies, after collaborating for almost 20 years, to sign the 5G MoU. It has showed an awesome partnership between Nokia and Taiwan Mobile.We would have exchanges on critical technologies regularly and develop applications for IoT, in order to promote the development of 5G, Cloud System and other technologies in the industry.

5G is widely speculated to be the last major technology to be developed after 4G. 4G services have been launched in various countries, including India and are showing positive results. In addition, both the companies will form a strategic partnership, where they will test products, hold seminars and press conferences, visit Nokia 5G research and development centers around the world and to meet and share views and opinions of experts, professing in the field of 5G communication.

According to a TRAI report released last year, no country in the world has 5G technology, while some companies claim to have tested 5G technology. There have been some claims by companies that 5G technology has been developed and will be in place soon. The versions of technology 2G, 3G and 4G are labelled on the basis of internet speed they offer on mobile devices and tablets. Technology experts believe that 5G technology will enable people to have a fibre network, like user experience on a wireless connection.

A 5G technology has various advantages. Firstly, for the wireless signals to work uninterruptedly, spectral efficiency should be significantly enhanced, as compared to 4G.Then, the coverage should be improved at a larger scale and should expand to all cities, towns and villages equally.

The signalling efficiency should be enhanced seamlessly. Latency should be significantly reduced, as compared to LTE. The data rates of several tens of MBps should be supported for tens of thousands of users.

In 5G, about 1 GBPS will be offered simultaneously to hundreds of workers, working on the same office floor. Additionally, several hundreds of thousands of simultaneous connections should be supported for massive sensor deployments.

It can provide speed of 10 GBps internet speed, which is 100 times faster than the mobile technology networks used these days. The Taiwanese government has started the process to constitute a joint working group, in order to work in the area of 5G. This also requires agreement on a set of policies like spectrum allocation.

Also, this will also improve the economy of a country, where the new technology can be devised for educational and research purposes, which will yield positive results. Then there is no need for a ‘6G’, if 5G works perfectly like a magic rubber!

Industry 4.0 will bring together physical and digital economies: Nokia

Digitalization, and Industry 4.0, is now a topline strategy. Virtual and real production are increasingly…