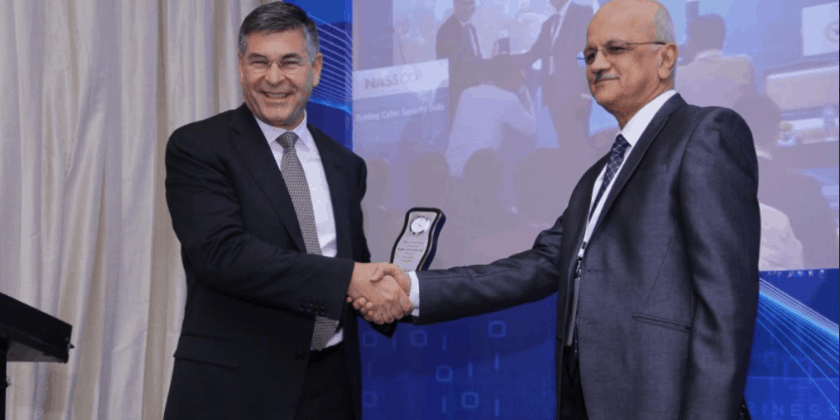 Michael A. Brown, President and Chief Executive Officer, Symantec was in New Delhi today where he entered into a tieup with NASSCOM for building Cyber Security Skills in India. Brown is eyeing a robust opportunity for the company behind the Modi government’s push for building cyber security platform by creating 1 million cyber security experts in the country. At present the country has barely 63200 cyber security experts which are insufficient given the volley of attacks on enterprise and government networks.

Brown signed a Memorandum of Understanding for “Building Cyber Security Skills” with Nasscom. According to the MoU, Sector Skill Council (SSC) NASSCOM and DSCI along with Symantec will focus on developing five prioritized job roles in cyber security along with a master training program. Additionally, the program also intends to fund the scholarship for 1000 women undertaking the cyber security certification by NASSCOM.

Brown maintained, “Symantec will share its skills to create cyber security experts in the country as there has been a significant increase in cyber attacks on Indian enterprises in the last one year. Security is an important aspect for the trends such as IoT. And trained human resource will be a major advantage for the country.”

Symantec to split from Veritas in October
Brown told Dataquest that globally the company is splitting into two. “Symantec is very much intact to its plans to split from Veritas. In October, the businesses will split with two different heads for both the companies. While I’ll continue to head Symantec, Veritas will have a separate CEO. But legally, the split will be announced in January 2016 to avoid stock issues.”

India focus and competition
Brown divulged that Symantec is continuously expanding its presence in the country and exploring opportunities in various sectors including the government which has announced its committment for Digital India and Smart Cities. “Symantec India has about 4000 employees across. We’ve opened a new office in Gurgoan for sales and marketing as we see more business opportunities in this part of the country,” said Brown.

When asked about the growing competition in the market in the information security space from competitors such as Websense, Fireye, etc, Brown added, “We are not concerned about the competition since it is a sign of the growth in the market. We understand that the market is scattered. But in any enterprise environment there are multiple security needs which can not completed by a single vendor. We are strong in most of the security functions.”