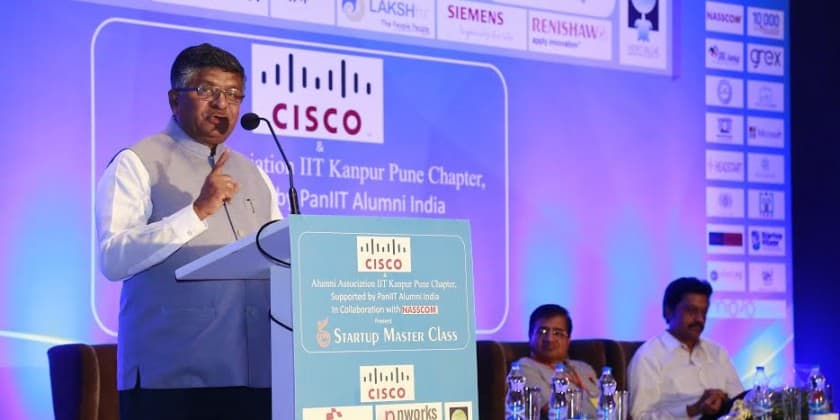 “Startups are the makers of new India.They have a dream—and innovative spirit and a knack to leverage technology”, said Ravi Shankar Prasad, Union Minister for Law and Justice and IT while delivering the keynote address at the the START UP MASTERCLASS (SMC) organized by Alumini Association IIT-Kanpur Pune Chapter supported by PAN IIT Alumini Association  and NASSCOM, TiE, MACCIA held in Pune.

START UP MASTERCLASS is targeted towards promoting entrepreneurship in India by creating and fostering an ecosystem for entrepreneurs, mentors and investors alike. The minister exhorted the startups and entrepreneurs present to leverage their passion and technological talent to serve the less privileged, centred in the villages and small towns.

The minister made an impassioned plea to startups to leverage the Digital India, Startup India, Make in India programmes and innovate across the spectrum of software, e-commerce, electronics manufacturing including defence and medical electronics.

Entrepreneurship is converting power of an idea to job and wealth creation” , said N R Narayan Murthy , co-founder Infosys in his keynote address.he said it was the governments responsibility to create a regulated incentives for entrepreneurs, who should have full freedom to create employment and wealth.

Narayan Murthy told the entrepreneurs present that their ideas should have highly differential value for corporations or end consumers. Pune city took centre stage as Kunal Kumar, Pune Municipal Commissioner and Ganesh Natrajan spoke on the efforts to make Pune the number one destination for start ups by 2020. Kunal Kumar said that a target to create 50,000 jobs in 4 years from startups has been set. He also announced the setting up of an innovation hub IN Pune in collaboration with government of UK.

KshatrapatiShivaji, Chairman and Managing Director, SIDBI in his address underscored the lifecycle and challenges of start ups. Shivaji spoke on initiatives of SIDBI like startupmitra.in and Venture Debt, a financial instrument that provides funding without diluting founders equity.

Shailendra Agarwal, President Alumini Association IIT-Kanpur Pune Chapter welcoming the delegates said that this event was just the beginning; the IIT-Kanpur Pune Chapter would be involved in handholding start ups on a long term basis. Post event plans include providing continuous support to interested entrepreneurs and startups that will be matched with the available experts, investors etc. This effort has been enabled by the use of advanced tools for evaluation of the start-ups to identify the opportunities for improvement. SMC was attended by about 800 relevant professionals, with more than 500 start-ups, 40 investors (Angels and VCs) and more than 60 mentors.