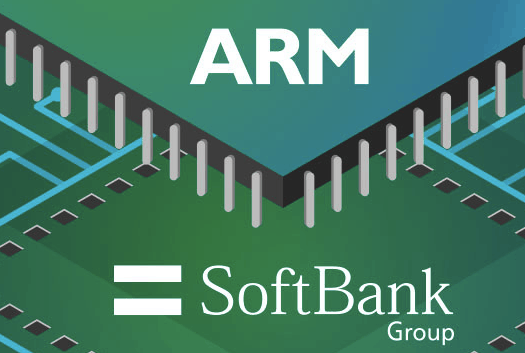 This is probably one of the biggest deals in the Semiconductor design space in the recent times. In an all cash deal, Japan’s SoftBank has acquired UK based ARM Holdings ( the chip design major) for a whopping $32 bn ( that’s 70 times ARM’s net income as per a report in FT). What makes the deal interesting as well as perplexing is the divergent tech lineage of both the companies. SoftBank’s interests are in telecom ( Sprint Japan)and investments in companies like  Ola Cabs, Alibaba , Snap Deal et al. Perplexing because it does not have any major semiconductor play.

On the other hand, ARM is a hardcore tech company, while it does not make any products in the semicon space like Intel or AMD, but it designs the core engines of the chips. In the last 25 years ARM technology has found its way inside 90 bn chips spread across the world. That’s a huge number – and ARM’s tech is pervasive – its on your smartphone, your cable STB’s to your fridge to Microwaves and what not.

ARM’s business model is simple but efficient, it makes money out of the licensing fee for its designs. And when you look at ARM tech inside billions of devices, no wonder its revenues have remained in the pink all these years.

But why sell such a flourishing company in the highly polarized semiconductor space which has been oscillating through a structural and cyclical recession the last few years? The answer probably lies in ARM’s future. SoftBank’s enormous financial muscle will be the key to ARM’s future innovations and this deal gives ARM the ample leverage to jumpstart the innovations for the hyperconnected IoT era. ARM’s play in IoT will be significant going forward as the huge devices that is to be connected out there in future demands newer chips with radical new designs. And ARM,  given its legacy is perfectly positioned to address those demands.

Reflecting on the deal, Stuart Chambers, Chairman , ARM, said, “ SoftBank has given assurances that it will invest considerably in the business, including doubling the UK headcount over the next five years and maintaining ARM’s unique culture and business model. ARM is an outstanding company with an exceptional track record of growth. The Board believes that by accessing all the resources that SoftBank has to offer, ARM will be able to further accelerate the use of ARM-based technology wherever computing happens.”

But now the key question is will SoftBank be able to pull this deal and snub other suitors during the ‘go shop’ period has to be seen. For instance, what if Intel gives ARM a higher price as ARM will perfectly sync into Intel’s line of business than SoftBank.

DEAL IN A SNAPSHOT 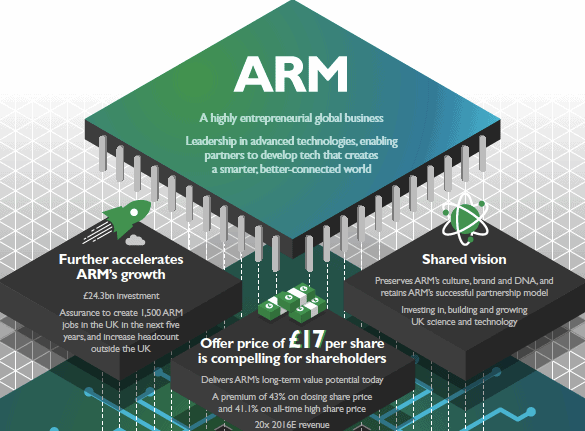 In a media release, Masayoshi Son, Chairman and CEO of SoftBank said: “We have long admired ARM as a world renowned and highly respected technology company that is by some distance the market-leader in its field. ARM will be an excellent strategic fit within the SoftBank group as we invest to capture the very significant opportunities provided by the “Internet of Things”. “This investment also marks our strong commitment to the UK and the competitive advantage provided by the deep pool of science and technology talent in Cambridge. As an integral part of the transaction, we intend to at least double the number of employees employed by ARM in the UK over the next five years”. “SoftBank intends to invest in ARM, support its management team, accelerate its strategy and allow it to fully realise its potential beyond what is possible as a publicly listed company. It is also intended that ARM will remain an independent business within SoftBank, and continue to be headquartered in Cambridge, UK,” added Son.

ARM has indeed pulled a dream deal, analysts say the price SoftBank has offered is fair and ARM could not ask more.