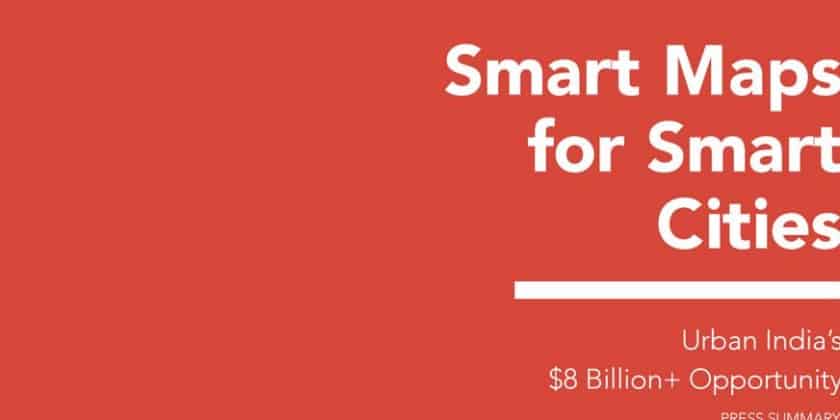 Dalberg Global Development Advisors, in association with the Confederation of Indian Industry (CII) today published Smart Maps for Smart Cities: India’s $8 Billion+ Opportunity, a new report that quantifies the value of smart maps to Indian citizens, businesses, and government within the context of India’s urban development.

The analysis finds that smart maps and dynamic mapping technologies will be critical tools for the development of India’s smart cities project. According the broader research, India is expected to see the greatest migration to cities of any country in the world in the next three decades, with over 400 million new inhabitants moving into urban areas. The expansion of India’s urban population will also have to be met with an expansion of infrastructure that is 20 times the capacity that has been added to India’s city over the last decade.

Dalberg’s report details how smart maps can facilitate the development of smart cities in little ways that add up to huge economic benefits for citizens, businesses, and government. Built on detailed analyses of nine high-potential uses of maps, the study highlights that smart maps can help India gain upwards of USD $8 billion in savings and value, save 13,000 lives, and reduce one million metric tons of carbon emissions a year, in cities alone. The benefits to society and economy as a whole are likely much greater.

Gaurav Gupta, Managing Director of Dalberg Asia, described the potential impact of the study: “Simple improvements in some of the most basic tools that citizens use can lead to significant social impact. Maps, by which citizens and organizations make sense of their surroundings, are one such ubiquitous and fundamental tool that technology has transformed,” he said. “The report shows that by liberalizing policy to enable the best technology to be applied to the mapping sector, we can spur innovation in this industry and equip society with a critical tool for driving positive social and economic impact.”

In a dynamically changing landscape like India, maps need to be updated faster and need better coverage of local businesses to make maps a highly useful tool for citizens. The unique challenges of dealing with India’s diverse and quickly changing urbanscapes offer unique opportunities for mapping players to innovate with locally relevant solutions that will make maps more useful for citizens.

Smart maps use mapping technology that capture a broad range of data and are built to update quickly and correctly in order to give people the most accurate information possible. Smart maps are also designed to be easy and intuitive to use in order to reach the widest possible audience, and they encourage innovation by making it easy for users or businesses to incorporate their own data.