In a message to graduating college students worldwide in 2017, Bill Gates identified energy as one of the three fields he would consider if he himself were a graduating student then. This was because “making energy clean, affordable and reliable will be essential for fighting poverty and climate change”.

And just as predicted, a rise in the usage of renewable and clean energy sources has been observed globally and as of March 2021, 24% of India’s electricity generation capacity is from renewable energy sources which amounts to 91 GW (excluding hydroelectric stations) out of the total 377GW. This has been set to reach 175GW by 2022 and 450GW by 2030. Consequently, the applications of clean energy sources have also been growing with applications not only to domestic and industrial use but also in upcoming sectors such as electric vehicles.

However, there are challenges associated with adapting to the changing circumstances. The electric grid with increasing share of renewable energy resources that are intermittent and variable require a host of new technologies for grid stability. In the emerging grid there are numerous points of power injection from the distributed resources whereas in the grid that we operated for over a century had few large power stations with predicable generation capacities. New technologies such as energy storage systems (ESS), demand response, digital technologies, electric vehicle integration with grid; and microgrids are becoming an essential component of the new green and smart grids.

Other challenges include inefficient analytical tracking of energy usage and management, the lack of a real-time monitoring system for the central grid to avoid blackouts and other accidents, self-healing grids, automated outage management, faster restoration of power and so on. With India seeing a rise in demand for electricity and the continuing urbanization of rural areas with greater electricity penetration, there is a strong need to change the existing grid structure to meet the new requirements.

The new solution will have to be cognizant of the need for technology to automate and maintain the increasingly complex and growing network, which is where smart grids enter the picture.

What is a Smart Grid?

To understand what smart grids are, we first have to understand what the electric grid is. “The grid” refers to the electric grid, a network of high voltage transmission lines, substations, medium voltage lines and low voltage distribution lines that deliver electricity to our home and businesses. It’s what you plug into when you flip on your light switch or power up your television.

Although the electric grid is considered an engineering marvel, it is being stretched to its capacity with the ever-increasing demand for power and proliferation of variable renewable energy (VRE) resources that are distributed. Moving forward, we’d need a new kind of electric grid which can automate and manage the increasingly complex needs of electricity in the 21st century.

A smart grid is a holistic solution that employs a broad range of information technology resources, allowing existing and new gridlines to reduce electricity waste and energy costs.

Smart grid technologies have countless applications and permutations, including smart meters in individual homes to the ability to access variable and distributed sources of energy based upon demand and availability. Smart meters empower electricity consumers to use energy based on price signals given as rates fluctuate during the day.

Why Smart Grids and their Evolution?

It is interesting to note that 19.3% of the global final energy consumed (according to REN21’s Global Status Report) was provided by renewable energy. Renewable energy is key to fighting climate change, but it does produce highly variable power, which could lead to lower energy margins and potentially even blackouts on cloudy, still days. Since renewable sources like solar and wind are variable, it will be critical to have a demand-responsive electrical grid that uses energy efficiently.

Therefore, the smart grid is expected to be a critical foundation for reducing greenhouse gas emissions and transitioning to a low-carbon economy.

Basic Definition: Conventional Grid – The traditional utility grid is a centralized system where power flows in one direction, from generation resources through the transmission-distribution system to the customer.

Smart Grid – A smart grid is a decentralized system where power flows in both directions, from generation resources through the transmission-distribution system to the customer and vice-versa from the rooftop solar panels (and other resources) at customer premises to the grid.

China and the Smart Grid Sector

To understand the evolution and growth of smart grids, one can look towards China, noted as a pioneer in the field by a Fitch Solutions report. As smart city initiatives in China have gained traction, smart grids provide opportunities for energy providers and users to interact and utilise technology to detect and react to changes in usage. In late 2019, the State Grid Corporation of China (SGCC) unveiled the ubiquitous power of the Internet of Things—which plans to develop China’s power grid by incorporating 5G and artificial intelligence (AI). As of 2020, China had approximately 500 pilot smart cities which incorporate 5G and AI technologies for urban management, a key feature being the development of Smart Grids.

“Whilst many countries are still in their first wave of smart meter installations, China is already on its second wave, looking towards two-way advanced metering infrastructure (AMI) smart meters,” noted Fitch.

The existing lag, coupled with the geopolitical tensions affecting the supply chain, makes it imperative for India to establish appropriate value chains locally and is indicative of the strong headroom for growth in the sector.

There have been leaps forward in technological advancements for power generation, but we are yet to become completely energy efficient. As of 2016, the estimated average gap between supply and demand of electricity (peak demand) is about 14%. The transmission and distribution losses are estimated between 26% and 32%.  There is an urgent necessity to make the transmission and distribution processes more energy-efficient, with rising urbanization across the country and this is where smart grid technology comes into play.

In May 2015, the Government of India, in a welcome move to bridge this gap, launched the National Smart Grid Mission (NSGM) with an outlay of USD 135.1mn (INR 980 crore) and budgetary support of USD 46.6mn (INR 338 crore). State-level smart grid missions and distribution utilities are integrated into the structure of the NSGM and the set-up of this structure will lead to easier, faster coordination with the various players in the Smart Grid Value Chain, including policy makers, utilities providers, component manufacturers and management solution providers. According to NSGM’s Project Status Report for January 2021, 9 Smart Grid pilot projects (under Integrated Power Development Scheme) – have been completed, including the IIT Kanpur Smart City pilot and other projects involving functionalities such as Advanced Metering Infrastructure (AMI) and Outage Management System (OMS) among others.

If India is to attain the sophistication of the Chinese Smart Grid network, a national priority, significant gaps need to be filled with indigenously developed technology – lack of live customer feedback mechanism and tracking, skilled workforce across the value chain and efficient implementation are some of the gaps that need to be bridged, thus presenting clear opportunities to start-ups working in this field.

The India Smart Grid Forum (ISGF) was established by the Ministry of Power (MoP) in 2011 as a  Private Public Partnership initiative with the mandate to assist the government, utilities and regulators on policies and programs for the promotion of Smart Grids in India. According to Reji Kumar Pillai, Chairman of ISGF: “Although India started with smart grid pilot projects way back in 2013, we have a long way to go as state owned distribution companies were struggling with grid expansion to rural areas for energy access, reducing the network losses and other priorities. Now, that we have electrified all villages and connected 99% of the households in the country, the priority is shifting to 24×7 reliable supply all across India and introduction of retail competition as well as electric mobility, promotion of electric cooking etc. Also, our ambitious target of 450 GW of renewable energy by 2030 would require energy storage systems and digital technologies including smart meters for efficient grid operations. The pandemic has driven utilities to take up digitalization on fast track and we see this as an irreversible trend.  Hence opportunities for innovation in this sector is immense in the coming years”

The successful implementation and usage of smart grids is dependent on government policy- India has taken major strides with policy measures set to bring about this change. There are multiple policies and initiatives in this regard. In 2019, the government allocated USD 911.4mn (INR 6,600 crore) for the Smart Cities Mission, about 7% more than in 2018. India’s nationwide roll-out of smart power meters, aimed at supporting ailing utilities and bolstering reliable electricity supply, will cost about $21 billion, according to Power Secretary Sanjiv Nandan Sahai. Additionally, the 2021 and 2020 union budgets both have allocated specific actionable steps for the same. 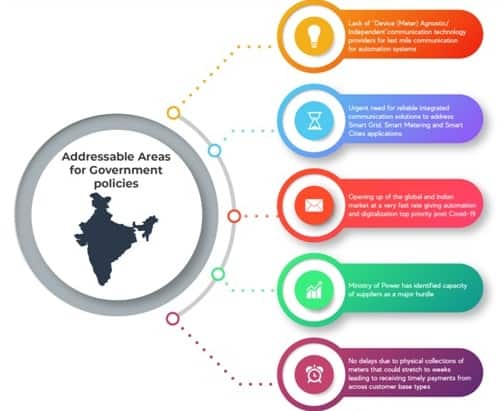 By extrapolating these trends in policies and initiatives via the Government and regulators, the opportunities for start-ups are evident. Additionally, the increased investment by the government along with private players shows the ecosystem’s long-term belief in smart grids and energy innovations.

The path that has already been paved by China will prove to be a useful measure in giving us a sense of India’s smart-grid future.  India at present with the goal of achieving nationwide smart meter and smart-grid coverage by 2024 is where China was in 2010-11. While China presently is at the end of achieving their goals of UHV and other intra-regional transmission capacity of 400 GW to connect all energy source types and becoming world leaders in management, technology and equipment of smart grids.

Hence drawing a parallel from this with China, India’s nationwide scalability of smart grids will only be possible by 2029-30.

Chinese startups in the Smart Grid sector have received a total funding of $376M while Indian startups have received $133M. But the bulk of Chinese smart grid and energy integration and transformation projects have been carried out by large public companies that have existed since decades and have metamorphosed from traditional conglomerates to cutting-edge tech providers across the value chain.

India has a unique opportunity here to leverage startups for innovative and faster implementation to reduce the time for nationwide smart-grid coverage. With the vast technological talent in India and government policy initiatives for manufacturing and startups especially in the electronics and renewable energy sector, there is immense potential to fill the gaps in the manufacturing of smart grid equipment and coming up with world-class low-cost software and integration solutions. With all the bolstered government support, policies and the much more mature VC and startup Indian ecosystem of 2021, supporting high potential startups across the value-chain to scale with speed by helping them partner with the large-scale conglomerates and utilities companies and refine their product offerings at global standards will bring about revolutionary pace of change in the Indian smart-grid ecosystem.

AjnaLens, a Mumbai based hardware and software company launches ‘Made in India’ Haptic Gloves, named…

Data science field is emerging at a faster pace than ever before. Time to value…