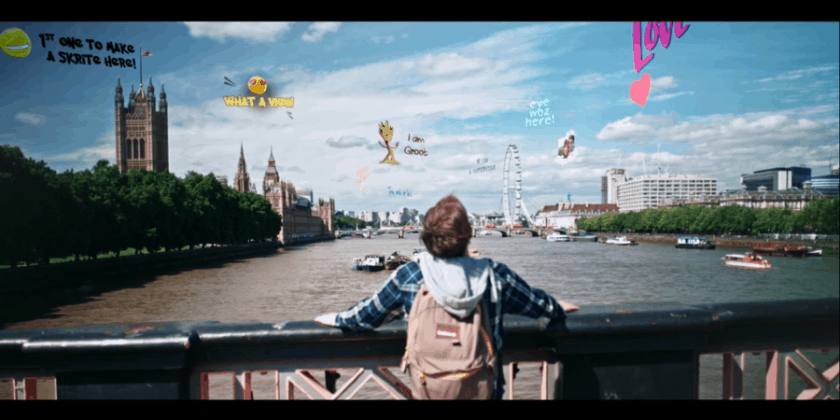 Skrite, the first app empowering users to create their own AR by leaving virtual messages in the sky, launched today—giving users the opportunity to ‘own the sky’. It is the the first app to offer user-generated AR in a space historically dominated by coders and developers—everyday users can use the app to create their own messages and explore others in the sky around them.

“We wanted to bring AR to the people,” explained company CEO and co-founder Rishab Jain. “Casual users shouldn’t feel augmented reality is off-limits because it seems too complicated or inaccessible. With the right interface, it’s simple to use and is a fantastic way to explore the space around you.”

Skrites—the pieces of content, users upload to the sky—can only be created in a user’s current location. Skrites are created in zones, with a maximum of 25 Skrites allowed per zone . The first user to create a Skrite in a zone gets that zone named after them. Jain says, “This allows users to virtually own a piece of the sky, whether it be the airspace above their home, business, or any location that brings value to larger companies that can potentially use this space for advertising.”

To explore the sky around them, users simply need to tilt their phone upwards. They can then see the public Skrites people have left around them, or even the private Skrites their friends have left for them. But users don’t have to just explore the sky above where they’re standing. Skrite offers an ‘augmented reality teleportation’ experience. Users can connect with people throughout the world and see a 360 degree view of the city around them—including unique content created by individuals living in that city—creating a unique blend of augmented and virtual reality.

“Skrite lets you travel without leaving your home through augmented reality teleportation,” says Dr. Arshia Siddique, COO and co-founder of Skrite. “It allows you to experience the places you’ve always wanted to go from the perspective of other travelers, or even from locals who pass through it every day.”

Offering a new way to explore the world with accessible augmented reality, Skrite is a fun and innovative alternative to stale social networks like Facebook and Snapchat. It’s the Pokemon Go-meets-social-network we didn’t know we’ve been waiting for.

We are Democratizing the Market by Giving the End Users a Choice to Buy High Performing PCs: AMD