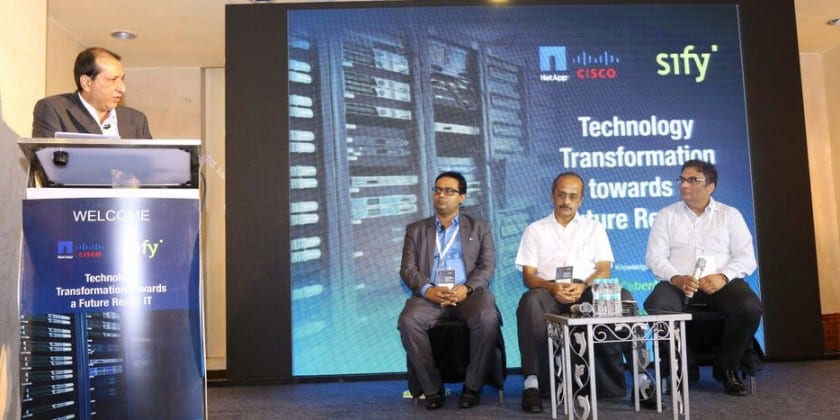 Technology has become nearly ubiquitous. The advent of virtualization, cloud analytics has changed the way enterprises, both big and small, approach business. It has led to a paradigm shift in the core dynamics of enterprises with digitilization being the primary driver of change. Sify and Netapp hosted a session amidst an august gathering of its partners. Various sessions were held pertaining to Sify and Netapp’s areas of interest in business and the road that lay ahead for the collaboration.

In a first, Padmashree winner, Dr Vijay P Bhatkar, was the speaker in the opening session that focused on Electronics and Computing. Dr Bhatkar highlighted that the growth of technology and its adoption has been unprecedented. So much that the forebears of the computer industry would not be able to fathom the widespread and omnipresent use of their inventions today. Especially considering that at present, system on chips (SOCs) are being used widely in everything from smartphones, watches and even home appliances. Keeping in line with Moore’s Law, advances in transistors and semi conductor fabrication processes are leading the fray when it comes to computing prowess in mobile devices.

Apparently, the Internet of Everything is going to herald a new epoch in the saga of the semi-conductor industry. Dr Bhatkar asserted at the conference, “Give me a field where computers cannot be used. Today, they are being used in nearly every industry and can be applied to every sphere of human life. No one would have imagined that the inventions of transistors would have such a profound impact. Technological disruptions shall keep happening in the industry.”

Sify’s collaboration with Netapp depicted its focus on cloud, storage and the datacenter. A spokesperson from Sify highlighted that the focus now was on an era of SDMs. Sooner or later Sify shall launch SDMs that will be software ready. It was further highlighted that the perceptions towards what is possible with technology was constantly changing and was only limited to the peerless human imagination. The underlying message to the industry was made clear; embrace change. To achieve this there is a need to bring about a veritable transformation in the fundamental thought process. There was also a significant focus on the role of CIOs as technology keeps changing and how they can help enterprises stay ahead of the competition in an intensely challenging marketplace.

In terms of ICTs, the industry is moving to an era of cyber physical devices. The changes in technology and advent of cloud computing are leading to new business models. Generating revenue streams and enhancing operational efficiency to unprecedented degrees.

The role of certain innovations was also highlighted. The evolving nature of storage solutions was highlighted where the lines between memory and story are increasingly blurring. With innovations in 3D NAND and the advent of newer technologies like 3D XPoint, memory are leading to storage solutions that are seamless, secure and state of the art. Consequentially, the high performance features are still available at entry flash solutions and it is expected that it would soon become the de facto standard for storage solutions across verticals.

The last session focused on the nature of cloud transformation. Emphasis was also placed upon the seven habits of creating effective enterprise data centers. Forecasts were made about a significant increase in private cloud adoption and a focus on hybrid clouds being embraced by businesses worldwide. Sify was moving towards an integrated play of data centers from a single window. Sify’s strategy is to eventually become an aggregation partner for OEMs, stack cloud offerings and security.

Customers are looking for vendors who can provide simplicity and consistency, security and protection, sustainability…

We are seeing the emergence of hybrid multi-cloud world: NetApp

NetApp held a roundtable today, to update on the industry activities and the NetApp Blue…