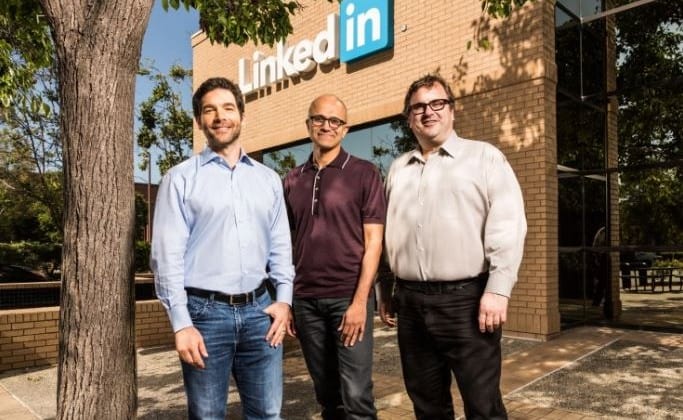 It is a big news today for the whole business community globally that Microsoft is acquiring LinkedIn, the social network for professionals with some 433 million users. Microsoft has cracked the deal for $26 billion, which means $196 per share, in cash. According to the media reports, the transaction has already been approved by both boards. But the regulatory approvals are awaited.

According to TechCrunch, “If for some reason the deal does not go through, Microsoft will have to pay LinkedIn a $725 million termination fee, according to Microsoft’s SEC filing detailing the merger.”

TechCrunch further writes that “the $196/share offer is a big hike on its closing price from Friday, $131.08. (And in premarket trading, unsurprisingly, LinkedIn’s stock has nearly crept up 64% to reach the share price MSFT is paying. Microsoft’s price is down 4% to $49.66 in pre-market trading.)”

While it is a big deal for Microsoft, it is also a huge milestone in Satya Nadella’s career. He has taken quite a few bold decisions to take Microsoft out of the woods, particularly in the wake of the fact that the craze for its Windows is constantly declining.

In its statement, the company has said that LinkedIn will be keeping its branding and product, become a part of Microsoft’s productivity and business processes segment. As of now, LinkedIn’s CEO Jeff Weiner will report to Satya Nadella.

Indeed, it is a big day for Satya and the entire Microsoft team. However, only time will tell how Microsoft uses or misuses LinkedIn.

LinkedIn, the professional networking site has announced that it has crossed 50 Mn members in…

Top 5 Trends of B2B Sales Industry in the Digital Era

By Mr. Saahil Goel, CEO and Founder, KartRocket In the flourishing Indian e-commerce landscape, the B2B…