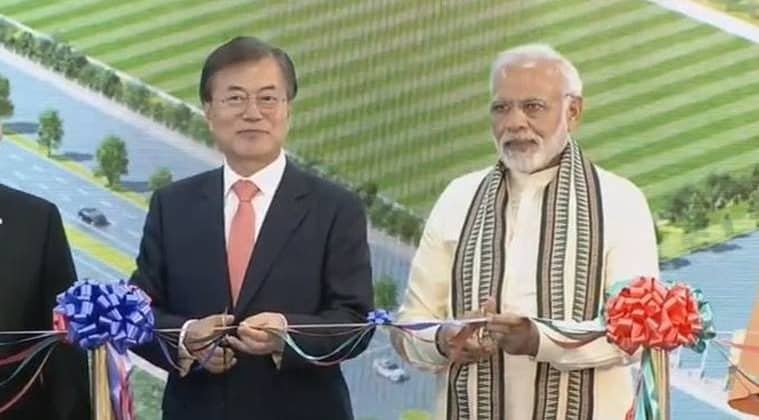 Samsung has opened what it claims to be the ‘world’s largest mobile factory’ in Noida. The Noida Sector 81 factory of Samsung was inaugurated by Prime Minister Narendra Modi and South Korean President Moon Jae-in. The 35-acre Noida factory is supposedly the world’s largest with a claim of 120 million mobile phones per year.

According to reports, the current capacity of Samsung’s mobile manufacturing plant in Noida, is around 67 million mobiles, which includes smartphones and feature phones. The new plant, will basically double the capacity. Samsung also has a manufacturing unit in Sriperumbudur, Tamil Nadu as well.

The factory will help Samsung to compete with rivals such as China’s Xiaomi, which became India’s biggest smartphone brand by shipments earlier this year. Samsung, which has been assembling phones in India since 2007, also plans to export India-made handsets to other South East Asian markets, the company said in a statement. Prime Minister Narendra Modi’s government has imposed taxes on imports of key smartphone components as part of a plan to encourage electronics manufacturing in India which would boost growth and create millions of new jobs.

The mobile factory was built with a budget of Rs 4915 crore. The factory will provide jobs to more than 2000 people. It will reach its capacity of 120 million by the year 2020. Samsung says it plans to manufacture 1 crore mobile phones per month, but that will be when the factory reaches peak capacity. They will be exporting phones from India to other markets. Samsung says it will use the plant to make entry-level phones that sell for less than $100, as well as flagship devices like the Galaxy S9.

According to HC Hong, President and CEO, Samsung India, a bigger manufacturing plant will help them cater to the growing demand for Samsung products across the country. Samsung India, that registered 27% growth in mobile business revenue for the financial year 2016-17 accounting for a whopping Rs 34,300 crore of its reported Rs 50,000 crore sales.

Samsung’s factories also manufacture fridges, television panels, washing machines, mobiles, smartphones in India. According to Tarun Pathak, Associate Director at Counterpoint Research, the new facility gives Samsung an advantage by reducing the time to market.” This will help Samsung bring some local features to the devices powered by R&D here.

Apart from this, the company can also bring in export opportunity for Samsung to SAARC and other regions,” Pathak said. Samsung has two manufacturing plants — in Noida and in Sriperumbudur, Tamil Nadu — five R&D centres, and one design centre in Noida, employing over 70,000 people and expanding its network to over 1.5 lakh retail outlets.

Faisal Kawoosa of CyberMeda Research feels that the development augurs better for the country than the company. “No doubt Samsung will have increased capacities in one of the fastest and largest mobile markets of the world, but it will also help them better leverage more market oriented R&D.” Not to forget the spurt this will give to the auxiliary industries and the overall ecosystem.