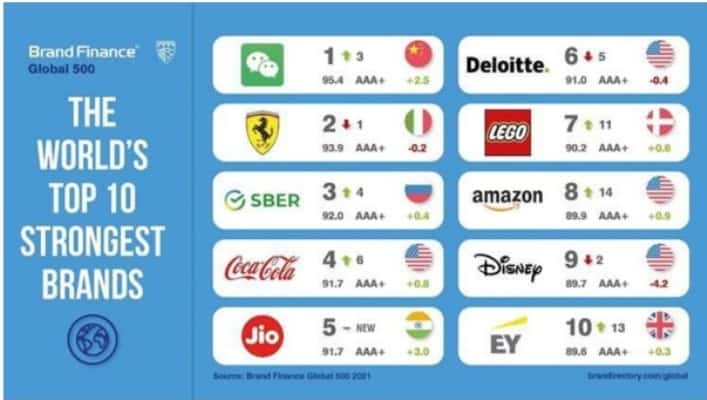 Reliance Jio, as per the research, rings in as the fifth strongest brand in the world globally after WeChat, Ferrari, SBER, and Coca Cola. Global companies that rank after Reliance Jio are Apple, Amazon, Disney, Tencent, Alibaba, Nike, and so on.

“Renowned for its incredibly affordable plans, Jio took India by storm through offering 4G to millions of users for free, simultaneously transforming how Indians consume the internet – known as the ‘Jio effect’. The dominance of the brand across the nation is evident from the results from Brand Finance’s original market research. Jio scores highest in all metrics – consideration conversion, reputation, recommendation, word of mouth, innovation, customer service and value for money – compared to its telecom competitors in India. The brand has no major weaknesses within the sector, and unlike other telecoms brands globally, Jio has shown that it has broken the mould, and enjoys genuine affection from consumers. As well as being a standout brand for brand strength, Jio is the fastest -growing brand in the ranking in the telecom sector in terms of brand value, bucking the negative trend across the industry, with a 50% increase to US$4.8 billion,” added the statement from the company.

Posted by: DQINDIA Online
View more posts
Reliance Jio is 5th Strongest Brand Globally: Here’s a List of Companies it is Ahead Of 0 out of 5 based on 0 ratings. 0 user reviews.
Airtel Demonstrates Live 5G Service in Hyderabad, Users Download Full-length Movie in ‘Seconds’
Cloud has still bigger potential than what is being projected: G7 CR Technologies

IIT Kharagpur Offers Free Online Course on Blockchain, Certificates to be Given