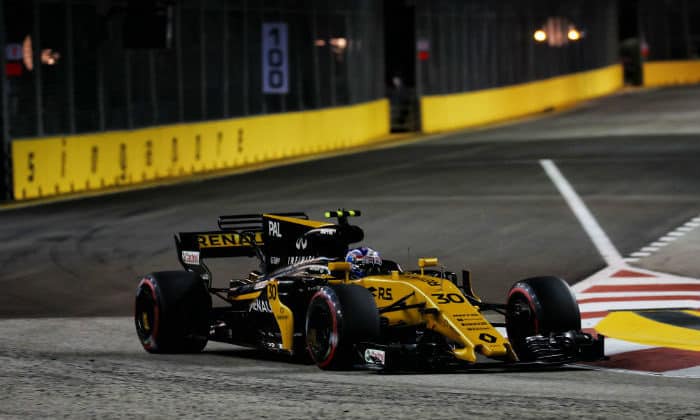 In an industry where every millisecond counts, here’s how Microsoft’s digital technologies are helping Renault Sports to win; both on and off track.

Formula One is one of the most watched sporting event globally, with over 1.6 billion cumulative audience a year. It is a sport that persistently pushes the limits of its people, processes, cars, and drivers in order to outperform its competitors.

In 2016, Renault decided to get back into team ownership to participate in the Formula One races around the world. Sports racing is no longer about the car and its technology. The impact of information technology has redefined the game.

“At the end of 2015 Renault announced it would return to team ownership. For 2016, the Renault name once again raced in F1 as a full manufacturer entry, under the Renault Sport Formula One Team banner as part of a minimum nine-year commitment to the sport with aspirations to once more return to the top step of the podium and challenge for championships.”

As a challenger brand, Renault Sport Formula One Team relies heavily on technology to help simplify processes, ease workflows and ultimately enable its engineering team to better plan and report on performances of the car on track. 2017 is the first year the company built its own R.S. 17 car as one single entity, and the goal is to break into the top three, in three years’ time.

Microsoft has been working with Renault Sport Formula One Team since 2012, when previously it was known as Lotus F1 Team. Said Simon Davies, Vice President for Microsoft Business Solutions, Microsoft Asia, “The goal of the partnership was for the race team to optimize their business processes and increase operational efficiency, improve quality, and enable a performance-driven approach by maximizing the impact of technology.”

With Microsoft Cloud’s business application tools such as Power BI and Dynamics 365, the team has been able to flag inefficiencies in its manufacturing processes. It has also enabled the team to garner detailed insights on everything from costs and staffing to material orders. Our team has seen an efficiency improvement of 20% during the manufacturing process, from design to storage, for selected parts, said Pierre. He adds, “More importantly, any small improvements that we can make to streamline our operations and processes can snowball into huge gains on the tracks.”

Use of Microsoft Cloud has been a game-changer for Renault. Sports racing is data intensive. Pierre says that on a race weekend, the cars generate more than 35 billion data points equivalent to about 30GB of data; their supercomputer generates 60TB of data per week – that’s enough storage for 25,000 hours’ worth of movies.

With Microsoft Cloud, Renault team is now able to analyze sets of data retrieved from the race cars on the track in real-time to maximize race simulations. Insights can be immediately retrieved and further analyzed by engineers at the two factories based in United Kingdom and France, in reduced time. Adds Simon, “One other benefit of hosting data in the Microsoft Cloud is the ability to immediately gain insights and offer corrections before the start of the next race.”

New technologies such as machine learning also play a huge role. Says Pierre, “With Azure Machine Learning, we are able to understand and optimize our race cars’ performances, such as predicting and creating an accurate tyre degradation model for simulation for every race course. This will allow our drivers to feel as though they are inside a race car on the circuit during simulation sessions. The accuracy of such simulations can save up to one second per lap – which can mean the difference between winning or losing the championship.”

Beating the odds of time, building a car, and putting it to race is the ultimate test for seamless collaboration between teams. Pierre gives us a sense of this when he says that it takes more than 1,000 professionals from various functions and offices to design, build and operate the two cars for 20 races every season. There are also around 90 people working on-the-go during the race season. By using Office 365, and particularly Skype for Business, Renault’s teams can seamlessly collaborate between engineering, logistics, and operations teams. The team is also exploring the use of HoloLens for the maintenance of the race cars and equipment, and for design review between factories to enable a perfect integration of the chassis and power unit.

The Renault team is already working to tap on the power of AI by integrating telemetry data captured by the 200 sensors in the cars to better anticipate issues on and off tracks – including engine and power unit performance in various race conditions. Says Pierre, “We want to be ahead of the game, and making our data work for us before and during the race is crucial.”