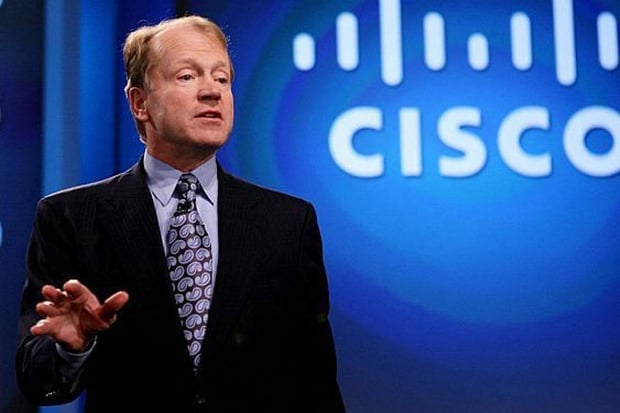 No comments
Announcing new investments for India, Cisco CEO and Chairman John Chambers informed that he had a meeting with Prime Minister Narendra Modi this morning‎. “I was amazed at his understanding of technology and the dream of a Digital India”, Chambers said.
While most of the discussions covered a range of issues from smart cities to skill development to building the national network, Chambers added that “The prime minister also talked about Cisco’s plans for manufacturing in India”. Not ruling out local manufacturing under Modi’s pet project ‘Make in India’, keeping in mind the growing market here, Chambers said that we need to take one step at a time and there is need to work on manufacturing ecosystem, tax laws, physical infrastructure. “
We have given our recommendations to the Government and the good thing is they are willing to change” said Chambers.
Introducing the incoming CEO
‎Chuck Robbins, Chambers said that the company plans to invest US $20 million in training 120,000 students under Cisco Networking Academy for jobs in a digital economy; and another US $40 million for the expansion of their development centers to a Cisco Smart City where employees work, play and learn, over the next five years.
To push digital adoption in the manufacturing sector and also help it’s own supplier ecosystem get a sense of India market, Robbins announced that Cisco is organising it’s Design and Innovation conference in Bengaluru in February next year. Cisco, which did business worth $1.1billion in India last year, expects to achieve a double digit growth this year. “From cautiously optimistic one year back, we are incredibly optimistic today” Chambers said.