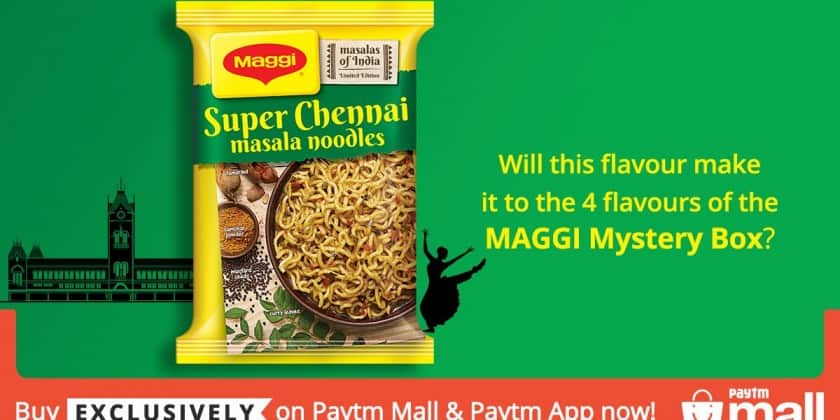 Paytm Mall announced that it has sold more than 150,000 Maggi Masalas of India packets as customers rushed to the platform to buy the new variants of their favorite 2-minute instant noodles.

Speaking on the announcement, Saurabh Vashistha, Vice President – Paytm Mall said, “We have sold out the first batch of 150,000 Maggi Masalas of India packets within 2 days of launch. There has been a great amount of excitement around these unique flavors from one of India’s favorite brands and we have received a phenomenal response from customers across the country.”

Earlier this month, Nestle and Paytm launched an online contest where customers could search ‘Meri Maggi’ on Google and vote for their four most favorite flavors to be launched. The company received an overwhelming 80,000 registrations and is set to announce the winners who would win 10,000 free Maggi Goodies.

Posted by: DQINDIA Online
View more posts
Tags:Google, Maggi Goodies, Nestle, paytm, Paytm Mall
Paytm Mall sells 150,000 packets for Nestle Maggi Masalas of India in 2 days of launch 0 out of 5 based on 0 ratings. 0 user reviews.
Nuovo Introduces Smart Mirror to revolutionize your life
How IT Consultancy Services can create a ‘Win-Win Situation’ for your business