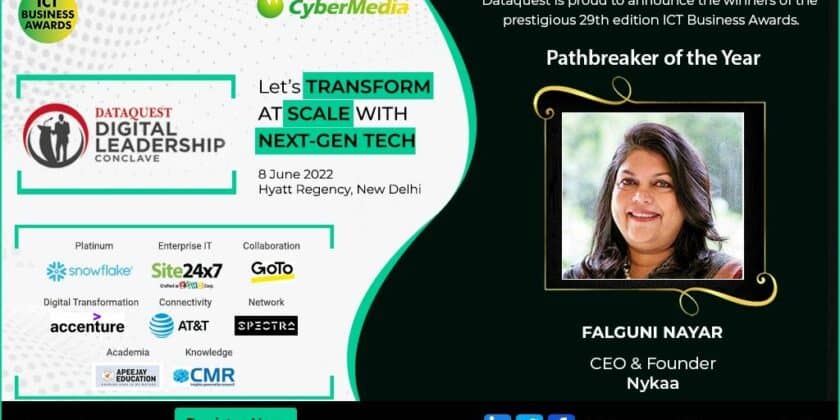 Falguni Nayar, CEO and Founder, Nykaa was presented with the Pathbreaker of the Year Award at the 29th ICT Business Awards show. The award show was held during the Dataquest Leadership Conclave held at New Delhi’s Hyatt Regency on June 8. The theme of the conclave was Let’s Transform at Scale with NeXtGen Tech.

“One cannot help but mention Falguni Nayar’s name when talking about strong and independent women who serve as a shining beacon of light to billions of women across the world. In fact, there’s nothing ordinary about the feat achieved by Nayar. After being with Kotak Mahindra Group for nearly 19 years, and being appointed Managing Director of the company in 2005, Nayar quit the company in 2012 to start the beauty and lifestyle retail company Nykaa, which means “one in the spotlight”. The company that she started with $2 million of her own money, shattered the $10 billion ceiling after the IPO.
What is especially inspiring is the fact that soon after Nykaa went public, Nayar became the wealthiest female Indian billionaire, with her net worth rising to the tune of $6.5 billion at the time of the IPO, becoming one of the two self-made female, Indian billionaires, who entered the list of top 20 Indians by net worth. The quintessential female entrepreneur now heads a team of over 1600 Nykaa-ites, and has built a beauty and lifestyle retail empire with a portfolio of 4000+ brands, including its own private label, available online and across 100 stores in India.
Nykaa not only redefined the meaning of e-commerce in India, but it also came out as India’s first-ever unicorn with a woman steering its success. The only advice that the entrepreneur, who serves as an epitome of success for budding female businesswomen, is that “More women need to dare to dream, and allow the spotlight of their lives to be on themselves.”

The Dataquest ICT Awards 2022 Jury and the Editors of Dataquest magazine were unanimous in their recognition of the outstanding work done by Falguni Nayar on ushering in and strengthening the start-up era in India and globally, and is honoured to confer the Dataquest Pathbreaker of the Year 2022 Award to her.”