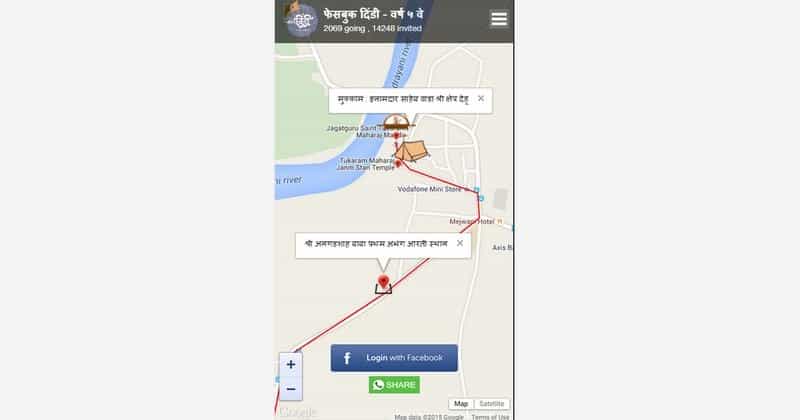 Every year, in the months of June and July, a centuries old Maharashtrian tradition, called Palkhi, is religiously followed by the Warkari sect. As part of this tradition, a palanquin carrying saint Tukaram’s footsteps made in silver, accompanied by more than 1.5 lakh devotees, goes forward in a pilgrimage that starts from Dehu in Pune to Pandharpur in Solapur district.

As with any pilgrimage that sees participation of so many people, safety of people is of utmost importance. Keeping this objective in mind, in a pioneering move, the organizers decided to partner with IT firm, Intellinet Datasys. The Pune-based firm will be providing a GPS-tracker that will be fitted with the bullock cart that carries the palanquin.

“The real-time tracker will help devotees in tracking the progression of the palanquin as it moves from one point to another. It will also help the organizers and the local administration at different points in the pilgrimage to prepare themselves adequately by estimating the time of arrival accurately,” states Sharat Airani, Director-IT, Intelligent Datasys.

Devotees can also see the procession of the palanquin on Google Maps using an Android app, which also gives them access to other information related to the pilgrimage. While many Maharashtrians like to watch the Palanquin movement conventionally, this option by Intellinet gives them the ability to track the pilgrimage online and in real-time. Additionally, more people who have been deprived of watching the Palkhi – such as aged, disabled, people who are unwell or non resident Indians can now follow the progress of the pilgrimage online.

As this is a noble cause, Intellinet has decided to do this project free of cost for the institution. “Intellinet India is proud to be associated with Virtual Dindi Project. We would like to thank FacebookDindi and Dehu Sansthan for allowing us serve this noble cause through our technology. In association with FacebookDindi of Swapnil More and his team, we are bringing the real-time location of the Palkhi using our GPS tracking device,” says Sharat.

Every year, India witnesses thousands of pilgrimages. Many of these pilgrimages see overcrowding and trampling issues. By making use of technology (as the organizers of Palkhi have shown), governance can be improved, making every religious function a safer experience.