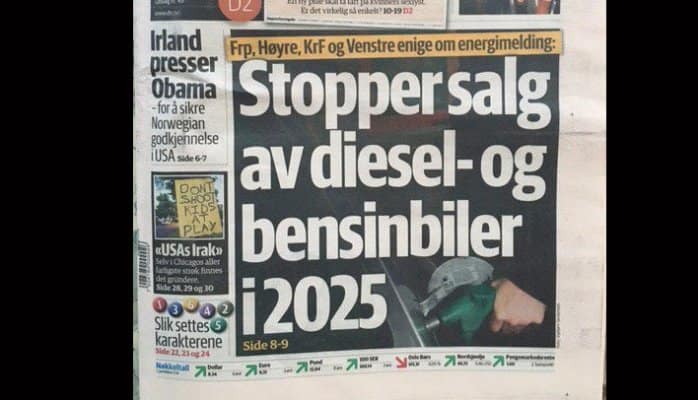 Norway, the wealthy Nordic nation in northern Europe (Scandinavia) is about to ban fossil fuel-run cars. It might be the first country that is poised to make a dramatic change that could be the start of a new trend. Prateek Chakraborty reports – 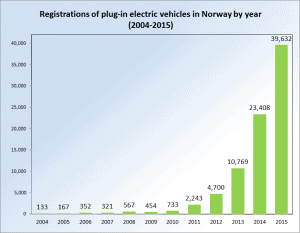 Norwegian legislators are reportedly preparing an energy policy to ban or at a minimum significantly reduce the allowable sales of cars and trucks that run on fossil fuels by 2025, which is around less than a decade from now. That policy, while designed to help combat climate change and usher in a future of emissions free vehicles, is a huge boost to various leading European car manufacturers such as Tesla, Volkswagen and Audi.

Øyvind Korsberg, an MP for the Progress Party explained how far-reaching the consequences of the new plan could be. “After 2025 new private cars, buses and light commercial vehicles will be zero-emission vehicles. By 2030, new heavier vans, 75% of new long-distance buses, 50% of new trucks will be zero emission vehicles,” he said, referring to the targets stated in the white paper on the energy policy mapped by the Norway’s Petroleum and Energy Ministry drafted in April this year.

For Tesla Motors, which is the world’s most iconic manufacturer of electric cars, Norway is one of their most attractive markets. That is largely because the country offers generous incentives and rebates related to electric vehicles and the country is a leader consumer of environment-friendly products. Also, Tesla cars are actually quite popular in Norway.

The move toward electric vehicles is part of a dream shared by those concerned about climate change and about fossil fuel depletion, viz., to turn the world into one big all-electric paradise, run everything that we can on electricity.

Theoretically, this is possible, but getting there will not be easy. First, such a transition will take time. The transition to an all-electric private car fleet would take about 10-15 years normally, based on Norwegian private car registrations done last year and the current total number of registered private cars.

While Norwegian electric car registrations are rising, so are total car registrations. Even if we generously assume that the rise in electric car registrations between now and 2025, will shave five years off the transition, that would still means that Norway won’t achieve an all-electric private automobile fleet until 2035. Further, Norway is already a leader in the move toward all-electric transportation. Other countries lag far behind. Last year, Toyota pledged to stop producing gasoline-only vehicles over the next 35 years and instead, focusing on hybrids and fuel cells.

But Norway’s stance on green energy is an interesting one. Though the Scandinavian country generates more than 90% of its energy from renewable hydropower, it is also Europe’s largest petroleum producer. Fossil fuels make up 45% of Norway’s exports and 20% of its GDP. Norway already has the highest percentage of electric vehicle market share of any country.

Speaking about the possible 2025 ban on non-electric cars, Elon Musk, chief executive of USA electric car company Tesla Motors, lauded the announcement in these words, “Just heard that Norway will ban new sales of fuel cars in 2025. What an amazingly awesome country. You guys rock!!” he tweeted.

What’s probably most remarkable here is that oil-rich Norway is currently one of the world’s largest exporters of oil products. Hence, this presents an environmental paradox. While Norway makes efforts to clean up its own environmental record by banning fossil fuel-run cars, it is actually shifting the burden of environmental degradation to the countries that import oil from Norway. Hence, this policy will be effective only when the world completely moves away from fossil-oil-run cars.

Moreover, in the backdrop of a growing global economic slowdown of many countries in the Western Hemisphere and China particularly, the fall of oil prices presents an opportunity for those countries, who export oil and petroleum products for fuel purposes. These countries can sit together and form a policy on the protection of the environment that will put some pressure on the oil rich countries. It is generally hoped that all countries, including the oil rich ones, can follow the protocols of the Kyoto Protocol Agreement, which says that the countries should at least reduce emissions by upto 40% by 2020.

India confirmed that it is evaluating a similar energy scheme for all its fleet to be fully electric and non-gas powered by 2030. The Dutch, Danish and German governments are also discussing the possibility to ban gas-powered car sales and only allow electric vehicle sales starting also by 2025.

So, let us hope that other countries come forward and take the pledge to ban fossil-fueled cars that is causing a nuisance and difficulties among the global citizens as fast as possible, before it’s too late!