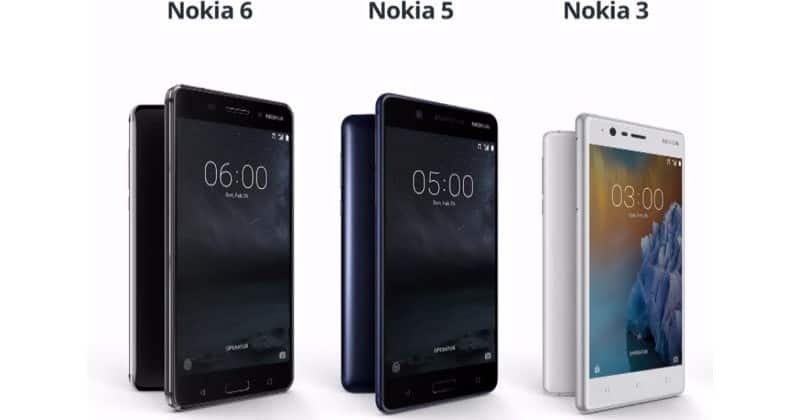 Nokia smartphones, Nokia 3, Nokia 5 and Nokia 6 have been launched in India today. HMD Global, which owns Nokia brand, had released an invite earlier this month which read, “Let’s join hands and welcome a new era of Nokia smartphones. Save the date.” This is for an event scheduled on June 13.

For those who don’t have a clue, Nokia phones are presently being sold by HMD Global, a Finnish start-up. Nokia’s phones are not being produced by the original Nokia since Microsoft took over Nokia’s mobile business and Lumia series shut down. However, Nokia still exists and is currently focusing on network technology. So these are the first Nokia smartphones hitting the India market since then.

Nokia 3, Nokia 5 and Nokia 6 are the smartphones which run pure stock Android 7.0 Nougat. HMD Global has already confirmed that the Nokia smartphones will have an Android O update which could be a plus point.

Talking about the specifications, Nokia 3 is a budget smartphone that costs Rs 9,990 and features a 5.0-inch 720p display protected with Gorilla Glass. Powered by MediaTek MT6737 quad-core processor, that features Mali-T720MP2 graphic processor, the device sports 16GB internal storage which is expandable up to 256 GB using microSD card, and 2 GB of RAM. Nokia 3 comes with an 8MP primary camera and 8MP front camera.

Nokia 5, priced at Rs 12,990, is another mid-range smartphone that features 5.2-inch HD 720p IPS LCD display with Gorilla Glass, the same Snapdragon 430 processor, 2GB of RAM, a 3,000mAh battery, a fingerprint sensor and 16GB of internal storage which can be expanded via a microSD card (of up to 256GB). Nokia 5 has a 13MP rear camera and 8MP front camera.

Nokia 6 is the high-end device on the Qualcomm Snapdragon 430 processor. The device, priced at Rs 21,000, comes in four colors options — matte black, silver, tempered blue and copper. It has 4GB RAM and 64 GB internal storage which is expandable upto 128 GB. It features 16MP rear and 8MP front camera. Nokia 6 comes with dual amplifier speaker and a 3000mAh battery.

Let’s wait and watch what is in store for the Nokia smartphones in this highly competitive market.