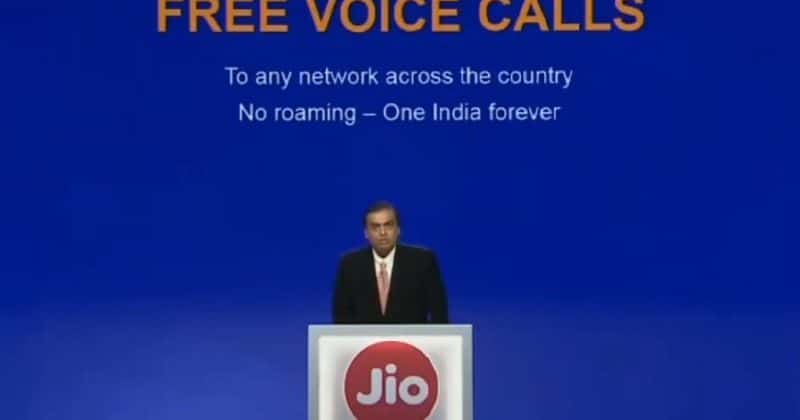 Reliance Jio mobile services are no longer completely free. In an unexpected move, Jio announced yesterday that it would charge 6 paise/minute to its customers for outgoing calls to other network operators to recover the Interconnect Usage Charge (IUC). IUC is basically the cost paid by one mobile telecom operator to another when its customers make outgoing mobile calls to the other operator’s customers.

Jio says that it has paid IUC from its own resources to Airtel, Vodafone-Idea and other operators while offering free voice to its customers. So far, in the last three years Reliance Jio claims to have paid nearly Rs 13,500 crore as NET IUC charges to the other operators.

“While the incumbent operators reduced voice tariffs for their 4G customers, they continued to charge exorbitant tariffs to their 35 – 40 crore 2G customers, and in fact increased the tariffs for voice calls to around Rs. 1.50/ minute. The price differential of free voice on Jio network and exorbitantly high tariffs on 2G networks causes the 35 – 40 crore 2G customers of Airtel and Vodafone-Idea to give missed calls to Jio customers. Jio network receives 25 to 30 crore missed calls on a daily basis. This huge missed call phenomena converts the incoming calls to Jio into outgoing calls from Jio to other operators. The 25 to 30 crore missed calls per day should have resulted in 65 to 75 crore minutes of incoming traffic to Jio. Instead, the call back made by the Jio customers results in 65 to 75 crore minutes of outgoing traffic,” said Jio in a press release.

Nevertheless, regardless of the explanation offered by Reliance Jio, customers seem to be enraged by this decision and are even threatening to boycott Jio. An old video of Mukesh Ambani promising free calls to Jio customers is being circulated. “All voice calls for Jio customers will be absolutely free. The era of paying for voice calls is ending. Jio will usher India into this new era. No Jio customer will ever pay for voice call again,” Mukesh Ambani, chairman and managing director, Reliance Jio is seen promising at the time of the launch.

“Mukesh Ambani promised at the time of Jio launch that they will never charge customers for calls. Businessmen don’t break promises,” says a customer on Twitter who echoes the sentiment of thousands of others.

However, Reliance Jio maintains that they would abolish the IUC charges as soon as TRAI terminates the same. IUC charges are fixed by Telecom Regulatory Authority of India (TRAI) and are currently at 6 paise per minute.

Reliance Jio is offering the following additional free data with IUC top-up vouchers to compensate for the charges that consumers have to pay. Reliance Jio also said that consumers can choose to make WhatsApp calls when required to avoid paying 6 paise/minute.

Posted by: DQINDIA Online
View more posts
No Reliance Jio Customer Will Ever Pay for Voice Calls Again: Mukesh Ambani during Launch 0 out of 5 based on 0 ratings. 0 user reviews.
JioFiber Plans May Never Be as Affordable as Reliance Jio Mobile Services, Here’s Why
Intellectual property: The growing factor for virtual businesses

From Fear of Taking Away Human Jobs to Serving Patients in COVID Wards: Journey of Made-in-India Robots with Rajeev Karwal

Rajeev Karwal, one of the most amicable IT leaders in the country and the man…