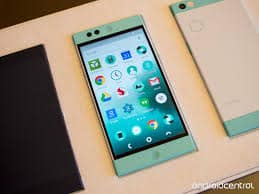 Nextbit Robin was unveiled in India on May 25th, 2016 for Rs19,999 and was expected to go on general sale on 30th May 2016. The smartphone received an extremely enthusiastic response from fans during the pre-order time resulting in Flipkart running out of stock even before the general sale began. The phone will be back on sale at Flipkart within a week.

It sports 5.2-inch touchscreen display with a resolution of 1080 pixels by 1920 pixels. The smartphone is powered by 2GHz hexa-core Qualcomm Snapdragon 808 processor and it comes with 3GB of RAM. The phone is bundled with 32GB of internal storage and 100GB of cloud storage, dual front speakers, fingerprint sensor, USB-C and NFC. Nextbit Robin packs a 13-megapixel primary camera on the rear and 5-megapixel front shooter and it runs Android Marshmallow version 6.0.1.

With a bold and fresh approach to design, attractive color options, and Smart Storage feature that addresses storage limitations that many users have faced, Robin is unlike any other phone in the market and truly stands out.
Nextbit has created the only cloud-first, design-forward smartphone for anyone who wants to be freed from the limits of today’s mobile technology.