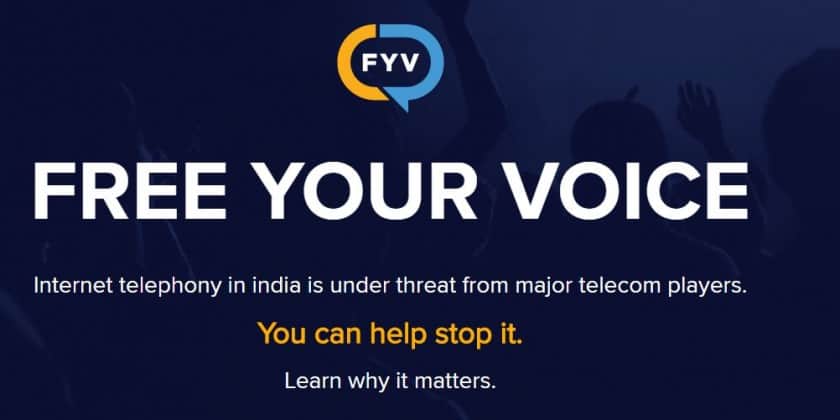 The capital saw the launch of “Free Your Voice”, a national campaign aimed at freeing the voice of the people of India by serial entrepreneur Bhavin Turakhia and supported by iSPIRIT in an effort to encourage fair laws to enable the launch of Internet Telephony in India, permanently.

The Free Your Voice campaign counters the stand taken by several incumbent players including, but not limited to, Vodafone, Idea and Airtel, in their response to TRAI’s consultation paper dated 22nd June 2016, with an intent to introduce prospective policies, recommendations and clarifications concerning Internet Telephony in India. 34 companies have submitted their comments and 6 companies have submitted counter comments to TRAI in this regard.

Commenting on the state of Internet Telephony, Bhavin Turakhia, Co-Founder and CEO, Directi said, “Internet telephony in India is under threat from major telecom players. Incumbent providers like Vodafone, Airtel, Idea, etc. are reluctant to reduce costs and drive innovation. Allegedly incumbent operators are claiming that only the Telecom Carrier that provides a data connection to a subscriber should be allowed to offer Internet Telephony to that subscriber over their Internet connection. This means for example, that a Vodafone 4G subscriber can only get Internet Telephony from Vodafone and no other provider.”

Sudhir Singh, Fellow iSPIRT, said, “A truly ‘Digital’ India demands VoIP to open immediately. Government should now remove all shackles. Leaving ‘internet telephony’ only to the incumbent large Telcos will not be in the interest of consumer. Regulator should fit in the entry of number of small and medium size players, also. This will help innovation, micro and small businesses and availability of variety of niche services.”

Internet Telephony enables customers to make calls to any phone number in the country, over the Internet, at 1/3rd the current calling rates and provides numerous benefits such as the ability to make calls over WiFi in bad signal areas, 90% cheaper international calling, HD voice, and innovations like simultaneous data transmission, video calls, and many more. The comments made by the incumbents in response to the TRAI paper make inaccurate claims and representations.

“This proposition is anti-competitive and will make India the only country in the world to not have fair Internet Telephony laws. This puts our nation in a disadvantageous position compared to the rest of the world in terms of being a digitally empowered nation,” added Bhavin.

The government of India has made provisions permitting unrestricted Internet Telephony in the Telecom license since 2008. This enables any telecom carrier in the country to provide lower cost calls through Internet Telephony to any mobile or landline number in the country to their customers. The party that is being called need not even have any app or Internet connectivity. The clauses enabling this in the License are reproduced below:

In spite of these provisions being there in the laws, India has not seen any internet telephony services being launched by the incumbent operators in the last 8 years. This fact underlines the kind of apathy being shown towards the Indian consumer.

“TRAI and DoT are progressive organizations who have always issued policies, guidelines and recommendations that enable the latest technology advancements for the country,” concluded Bhavin. “This is one of those instances where the government’s policies have been almost a decade ahead of their time, and yet the private sector has not launched Internet Telephony for the masses.”

As a part of the campaign, http://freeyourvoice.co.in goes live today to create awareness about internet telephony and its current state of affairs in the country. You can make a difference by spreading the word on social media with #FreeYourVoice. You can also use our website to send a mail to broadbandtrai@gmail.com and help TRAI take the right step towards India’s Digital evolution.