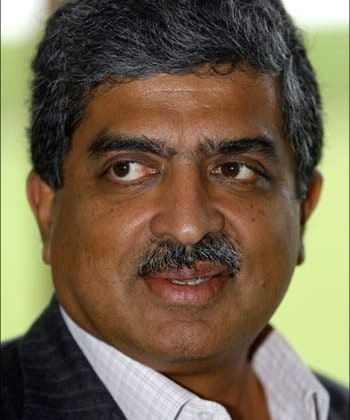 Infosys announced that its Board of Directors has unanimously approved the appointment of Mr. Nandan Nilekani as the Non Executive Chairman of the Board, effective immediately. Mr. Nilekani has played a pivotal role in India’s transition to a digital economy through his role in driving UIDAI.  He is also one of the co-founders of Infosys and served as its CEO from 2002 to 2007.

In welcoming Mr. Nilekani, the outgoing Chairman Mr. R. Seshasayee, who stepped down from the Board today, stated, “Nandan is the ideal leader for Infosys at this stage in the Company’s development. His appointment will allow Infosys to focus on the strategic changes it needs to make in order to capitalize on the attractive opportunities in the years ahead. Under Nandan, Infosys will build a cohesive management team that will no doubt take the Company to a leadership position in the industry. I believe these changes will infuse further confidence to the stakeholders in executing the transition plan and in reinforcing the strategy for the future. I am confident our employees and customers will join me in welcoming Nandan to the Company.”

Also stepping down from the Board, effective immediately, are Dr. Vishal Sikka, Prof. Jeffrey Lehman and Prof. John Etchemendy, each of whom welcomed the appointment of the new Chairman. Dr. Sikka said, “Last week I said that my remaining on the Infosys Board was to primarily enable a smooth transition. In Nandan, we have found an ideal leader to manage this transition. “I welcome Nandan’s appointment as Chairman to help guide Infosys to new frontiers of success and wish him, Pravin and all Infoscions the very best in the times ahead.”

Prof. Lehman, who was scheduled to retire from the Board in April 2018, stated, “With Vishal’s departure, Infosys is entering into a stage in which the time demands on independent directors will be compounded even further. In light of the other demands on my time, I think it best if I accelerate my departure from the Board by a few months to allow a new independent director to start in this important role.”

Prof. Etchemendy stated, “It has been a great honor and pleasure to serve the shareholders of Infosys for the past three years, and to have a front row seat during the transformative strategies that Vishal Sikka brought as the CEO. With Vishal’s departure, the board and his successor will embark on a new phase in Infosys’ future, and I think that giving up my board seat to a new independent director is the right decision.”

Upon the appointment of Mr. Nilekani as Chairman, Mr. Ravi Venkatesan stepped down from his role as Co-Chairman. Mr. Venkatesan will continue on the Board.

The Board had, on August 18, 2017, appointed Dr. Sikka as the Executive Vice Chairman (EVC) to facilitate a smooth transition. This transition has been expedited with the appointment of Mr. Nilekani. Given that the EVC employment agreement with Dr. Sikka had not yet been executed, the Board, prior to the induction of Mr. Nilekani, decided that the Company will complete all resignation formalities as per Dr. Sikka’s employment contract as MD and CEO as executed on April 1, 2016 and approved by the shareholders. Accordingly Dr. Sikka will receive 90 days’ base pay in lieu of notice of US$ 246,575, a variable pay of US$ 205,572 and company-paid COBRA (employee benefits) for 90 days. All equity awards outstanding as on separation date to the extent such awards are unvested will terminate on the date of separation. All equity awards that vested during his employment with the Company will remain as vested as per the terms of the equity plan and award agreement A separation agreement reflecting this and other terms such as a mutual release and non-disparagement obligation has been approved by the Board.

Mr. Venkatesan, took this opportunity to thank Mr. Seshasayee, and stated, “It is a great privilege to have worked with a person of such stature and dignity as Sesh. It has been an honour for the entire Board to be captained by him. His strength of character and his unwavering commitment to the Company is deeply admired by all members who have served alongside him on this Board.”

He further stated “Jeff and John have been invaluable colleagues on the Board, providing guidance and ensuring continuity through the significant changes Infosys has seen during this period. I also thank Vishal for all his contributions including his commitment to facilitate a smooth transition.”

Mr. Nilekani added, “I am happy to return to Infosys, now in the role of non-executive chairman, and look forward to working with my colleagues on the Board and in executive management on the business opportunities we see before us and delivering benefits to our clients, shareholders, employees and communities. I thank Vishal for his service as the CEO of Infosys over the last 3 years and wish him well in his future endeavors.”

Mr. Nilekani also stated that the Board will actively consider a broad based shareholder consultation process as a critical part of its overall engagement initiatives with all the stakeholders of the Company that are being taken up on a priority basis.

Mr. U. B. Pravin Rao who will continue as Interim CEO and MD and, also was pleased to welcome Mr. Nilekani to Infosys. The Infosys Board will continue with its earlier stated plan to identify a permanent CEO and MD.

The Company will organize two investor calls of an hour each to discuss the announcements.

The dial-in numbers for the calls will be put up on the Company’s investor website.